Royal Family: How does the Queen celebrate Christmas? 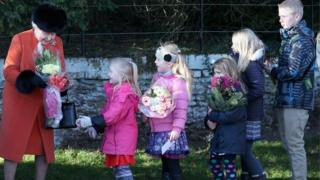 The British Royal Family is probably different to yours in lots of ways!

But like lots of other people in the UK, they celebrate Christmas and have a load of family traditions for how to spend the day.

So what do they actually do on the big day? Let's find out. 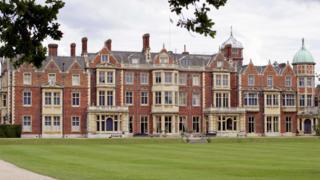 Where does the Royal Family spend Christmas?

Since 1988, members of the Royal Family have celebrated at Sandringham House, one of the Queen's private homes, on a big estate in Norfolk.

In keeping with their German heritage, the Royal Family start their festive celebrations on Christmas Eve - and this also means that on Christmas Day, they can focus mainly on church and royal duties, especially the Queen's Christmas message.

They all meet on Christmas Eve in the White Drawing Room at Sandringham, the Queen's residence in Norfolk, to exchange presents and finish decorating their 20-foot-tall tree.

Quiz: Which royal baby is which?

What are Harry and Meghan doing in South Africa?

Royal historian Kate Williams told the BBC: "It's quite set, it's quite formal. It's looked pretty much the same since the Queen's youth.

"You arrive when told to arrive... There are quite a lot of different dresses required - change for church, change for dinner."

Before gifts are given on Christmas Eve, they are placed on a white linen-covered trestle table, with cards marking exactly where each person should go.

There they enjoy a tea of scones, sandwiches and cakes before retiring to dress for a formal dinner.

What does the Royal Family do on Christmas Day? 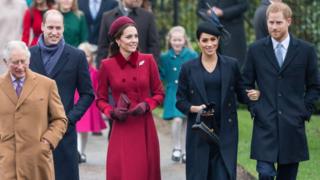 On Christmas morning, each royal wakes to a stocking of small gifts and fruit at the end of their beds.

When they get up, the family head to a service at St Mary Magdalene Church in the village of Sandringham.

After the service, they usually spend some time meeting well-wishers gathered outside the chapel, before returning to the estate for a traditional turkey lunch.

Then, the family settle down to watch television, including, of course, the Queen's speech!!

Do members of the Royal Family give each other Christmas presents? What do you buy for the person who has everything?

The Queen has the Crown Jewels, loads of royal palaces and gifts from all sorts of world leaders - so where do you begin?

According to experts, Her Majesty is said to prefer practical gifts over anything too fancy.

One Christmas, Kate, the Duchess of Cambridge expressed her anxiety about what to buy her grandmother-in-law. 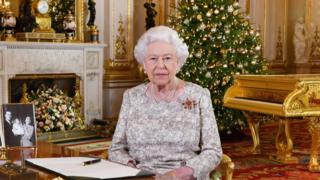 WPA Pool
On Christmas Day the Queen's Speech is on TV

"I thought 'I'll make her something,'" she said, "which could have gone horribly wrong.

"But I decided to make my granny's recipe of chutney. I was slightly worried about it, but I noticed the next day that it was on the table."

How will Kate and William spend Christmas this year? 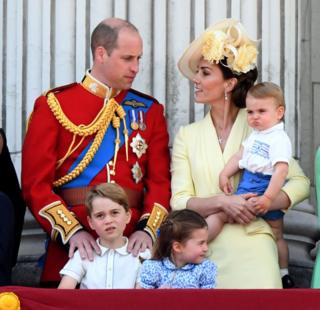 The Duke of Cambridge, Kate and their children - George, Charlotte and Louis - are expected to spend Christmas with the Queen and Prince Philip, the Duke of Edinburgh, at Sandringham House.

How will Harry and Meghan spend Christmas this year? Since 2017 when they announced they were getting married, Harry and Meghan have gone to Sandringham for Christmas.

But this year, royal watchers say the Duke and Duchess will be celebrating Archie's first Christmas with Meghan's family.