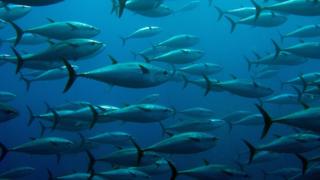 Some types of fish including tuna, marlin and sharks are all at risk because of climate change and nutrient pollution, scientists say.

According to new research, climate change is driving oxygen from our oceans which is having a negative impact on these species.

Seven hundred ocean sites are now believed to be suffering from low oxygen, compared with around 45 sites in the 1960s.

More on the effects of climate change

The researchers also warned that areas of water which contain no oxygen at all have quadrupled over the same period.

The findings were presented at the COP25 conference in Madrid. 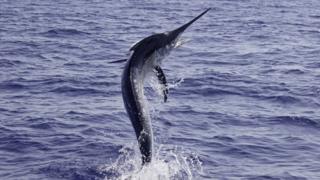 Getty Images
Marlin may also be negatively impacted by changes to the seas' oxygen levels
Why are oxygen levels falling?

Our oceans absorb roughly a quarter of all fossil fuel emissions, but there are fears that the world's seas will eventually reach a limit.

When looking at current trends, oceans are expected to lose 3-4% of their oxygen globally by 2100.

What is nutrient pollution?

Nutrient pollution occurs when too much of certain nutrients like nitrogen and phosphorus end up in areas of water. The nutrients act like a fertiliser, causing lots of algae to grow. The algae growth prevents sunlight from reaching plants like sea grass that need it. When these plants die and decay, the oxygen in the water is used up. This had a negative impact on other species living in the sea.

This is worse in the world's tropical regions and most of the oxygen loss is thought to take place in the top 1000 metres of the sea which contains the highest levels of biodiversity.

"If we run out of oxygen it will mean habitat loss and biodiversity loss and a slippery slope down to slime and more jellyfish," said Minna Epps from the group IUCN who carried out the study.