Climate change: What's Greta been saying at the COP25 conference in Madrid?

Teenage climate activist Greta Thunberg has made it to Madrid for the COP25 conference.

The 16-year-old arrived in the Spanish city on Friday and will be attending the climate change event.

Here's all you need to know about what she's been up to so far. 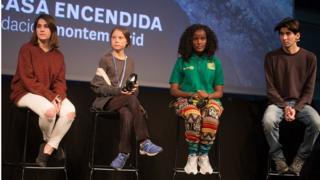 Speaking at a news conference, the activist said she hoped something concrete would come from the summit and that it would bring about more awareness on climate issues.

Despite the school strikes, which began over a year ago, Greta believes there has been little action from those in power.

She criticised world leaders who she says haven't grasped the urgency of the climate crisis.

You can watch what she said by watching the video at the top of thee page , or by clicking here.

We've been striking for over a year and basically nothing has happened. 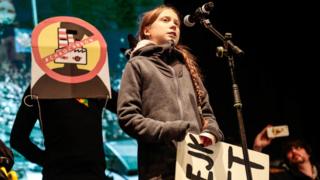 Greta took part in a big climate change demonstration on the evening of her arrival in Spain's capital.

The events organisers said that around 500,000 people took part, although the authorities say the number was a lot lower. 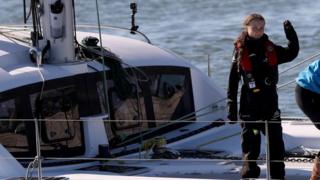 It took Greta a total of 21 days to get to Madrid for the UN climate summit.

The conference, which has seen world leaders come together to discuss how to tackle climate change, was originally meant to take place in Chile, South America.

However, the location for the conference was changed at the last minute following protests against the Chilean government.

Greta arrived in Lisbon in Portugal after sailing for 20 days across the Atlantic. The Swedish teenager completed the final leg of her journey by taking an overnight train from the Portuguese city to Madrid.