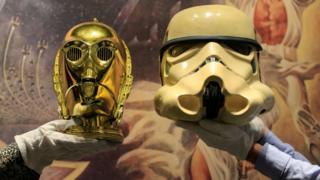 An auction house is selling some memorabilia from the original Star Wars trilogy, from the head of Darth Vader to a rare Star Wars Christmas card.

At the moment everyone is talking about Star Wars spin-off The Mandalorian and in particular baby Yoda, but if anyone wants a bit of the original Star Wars films, A big auction company called Sotheby's is selling art pieces and classic toys from the time.

Star Wars film hit the cinemas in May 1977 and in the years following eight further films have been produced.

New Stars Wars Trailer: Has Rey turned to the dark side?

There's a new Mulan trailer out!

How do film companies keep their scripts safe?

Star Wars items can fetch a lot of money, as proven by the Darth Vader costume which went for a whooping £1.5 million.

It was the first film to introduce merchandise globally as a way to increase a film's popularity and make more money.

Here are some of the iconic items on sale. 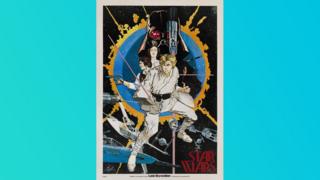 Howard Chaykin, a comic artist, was commissioned to design this advance poster and in 1976 it was distributed at the San Diego Comic-Con in an attempt to create interest in the film.

Even at just $1 the posters did not sell well.

If you look closely you can see Mark's signature on the leg.

The Empire Strike Back toy figures 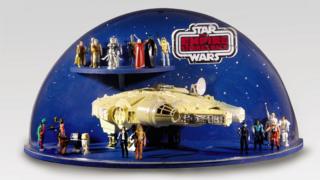 These The Empire Strikes Back Toy figures and Millennium Falcon were from a toy shop display in the 1980s.

At the centre of the display is the Millennium Falcon, surrounded by a number of hand-painted figures in , including R2-D2, C-3PO, Chewbacca, Darth Vader, Princess Leia, Luke Skywalker, Han Solo and Obi-Wan Kenobi.

'Bring me the head of Darth Vader' 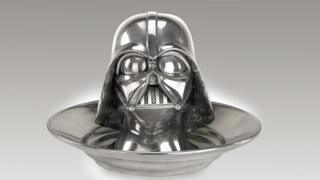 Darth Vader is one of the scariest villains of all time. This is not a scene from one of the films, but a sculpture created by artist Clive Barker.

Called 'Bring Me the Head of Darth Vader', the powerful Jedi is depicted in aluminium.

The Empire Strikes Back Christmas card 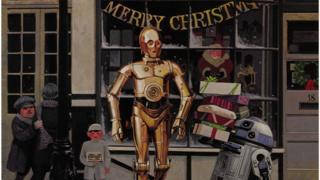 If C-3PO and R2-D2 look a bit out of place that's because they've been moved from the galaxy far away to a traditional Christmas scene.

Star Wars: The Mandalorian and Clone Wars, what we know