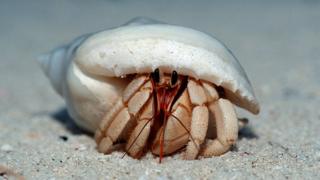 More than 500,000 hermit crabs have died as a result of plastic pollution according to a new study.

Researchers at the University of Tasmania and the Natural History Museum in London found that the crabs, which are part of the crustacean family, died after becoming trapped in plastic waste on two tropical islands.

Around 508,000 crabs are believed to have died on the Cocos (Keeling) Islands in the Indian Ocean and a further 61,000 on Henderson Island in the Pacific. This is equal to roughly one or two crabs per square metre on the beaches.

Prince William: 'Plastic is the enemy'

Why it's snowing plastic in the Arctic

What is plastic pollution?

Plastic pollution is the build up of plastic in the environment. This can cause harm to wildlife, marine life and humans.

Hermit crabs don't have a shell of their own.

Dr Alex Bond, Senior Curator at the Natural History Museum, explained: "Hermit crabs do not have a shell of their own, which means that when one of their compatriots die, they emit a chemical signal that basically says 'there's a shell available' attracting more crabs who fall into the containers and die, who then send out more signals that say there are more shells available."

This leads to a cycle, resulting in the death of more and more crabs. 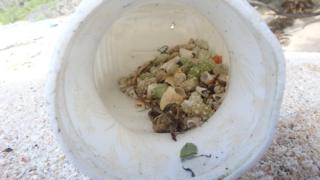 Natural History Museum
The study found that more than 550,000 crabs had died on two tropical islands

Hermit crabs play a really important role. They help fertilise soil, spread seeds and clean up mess. It's feared that a fall in their numbers worldwide could have a negative impact on ecosystems.

The researchers who worked on this study found that the Coco and Henderson islands contained millions of pieces of plastic posing a threat to crabs.

Large amounts of plastic debris are being found on beaches all over the world, many are home to hermit crabs also likely to be negatively affected by plastic.

"These results are shocking but perhaps not surprising, because beaches and the vegetation that fringes them are frequented by a wide range of wildlife," said Dr Jennifer Lavers who led the study.

"It is inevitable that these creatures will interact with and be affected by plastic pollution."

Drowning in plastic: The Caribbean beach covered in 30 tonnes of waste plastic

We want YOUR questions about the Women's Euros