Climate activist Greta Thunberg has arrived in Lisbon, Portugal after sailing for 20 days across the Atlantic.

The Swedish campaigner travelled from New York so she could attend the United Nations (UN) climate summit, called COP25, which is taking place in Spain.

Greta, who refuses to fly by plane because of the impact it has on the environment, had originally made the journey from the UK to the United States by boat to attend two climate change conferences.

But one of the meetings was moved from Chile to Spain after social unrest in the South American country.

We need to work together to make sure that we secure future living conditions for humankind, and that we fight for not only ourselves, but for our children and for our grandchildren and for every single living being on Earth. 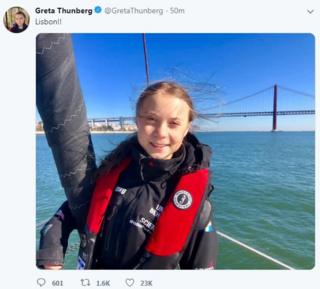 It meant Greta had to unexpectedly find her way back to Europe!

For her journey back across the Atlantic, she asked for help from fans and was offered a lift by a family of YouTubers who post videos about their journey around the world.

Now she's landed in Portugal she'll make her way to the neighbouring country of Spain for Friday to attend the conference which is taking place in the capital city, Madrid.

She arrived at Santo Amaro Port in Lisbon where she was greeted by supporters and activists who were staging a protest against climate change at sea. 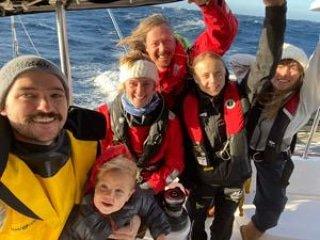 What did Greta say when she arrived?

Speaking to the crowd Greta said:

"We need to work together to make sure that we secure future living conditions for humankind, and that we fight for not only ourselves, but for our children and for our grandchildren and for every single living being on Earth.

And everyone has to do everything they can in order to make sure they are on the right side of history." 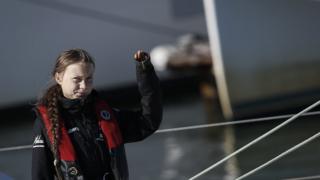 She added, "It feels so amazing to be home back in Europe. I have been on quite an adventure, of course I, as well as the other climate activists, we will not stop, we will continue to do whatever we can, continue to travel around, and to put pressure on people in power and to make sure that they prioritise this the highest.

And eventually we will be going to COP25 and we will continue the fight there to make sure that within those walls, the voices of the people are being heard."

Climate change: What is Cop 25 happening in Madrid?

Which celeb has had to quit Dancing on Ice?