Who was Nancy Astor? 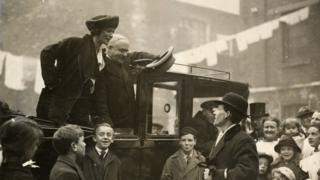 Plymouth Museums Archive
Lady Astor held the Plymouth seat for 26 years between 1919 and 1945.

Nancy Astor. It's a name you might have not heard before, but she is very important in British politics.

100 years ago on 28 November she became the first female MP to take up her seat in the House of Commons.

She represented the Conservative Party in the 1919 general election.

Suffragettes: Who was Emmeline Pankhurst?

When did women get the vote? 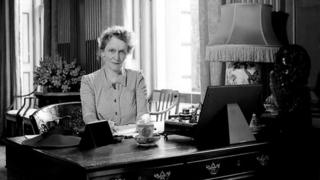 She was not actually the first woman to win an election in the UK.

Constance Markievicz had been elected the previous year in 1918, but was unable to take her seat due to her being a member of Irish republican party Sinn Féin.

Nancy was originally from Danville, Virginia in the United States and moved to England in 1905 in her twenties.

Her husband became MP for Plymouth Sutton in 1918, the same year in which some women won the right to vote and in which the Parliament (Qualification of Women) Act was passed, allowing them to run for election.

In 1919, Waldorf Astor's father died and he inherited the title of Viscount Astor, forcing him to give up his seat so that he could take up his new place in the House of Lords.

It meant Nancy went for his vacant seat and became the UK's first ever female MP.

What did she stand for?

Nancy argued for the rights of women and successfully saw the female voting age lowered from 30 to 21 in 1928.

However, the bill she worked hardest on was the Intoxicating Liquor Act, known as Lady Astor's Bill.

Passed in 1923, it restricted the sale of alcohol to those 18 and above, rather than 14, and remains in place today.

After seven successful elections and 26 years in the House of Commons, Nancy Astor retired from politics in 1945. That same year, a total of 24 women were elected to Parliament. 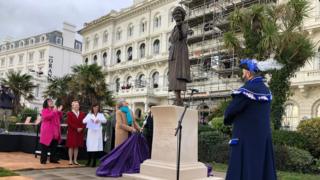 How has she been remembered?

This year, former prime minister Theresa May revealed a special statue of Nancy.

It was put up on the Hoe in Plymouth which is near her old family home.

Lady Astor was also remembered with a Great Western Railway train named after her which travelled from London Paddington to Plymouth.

Mrs May who was the UK's second female prime minister after Margaret Thatcher said she was "honoured" to be involved and added: "When Nancy Astor became the first woman to take her seat in the House of Commons, 100 years ago, our country and our democracy were changed for the better."

The statue was sculpted by artist Hayley Gibbs after £125,000 was raised through crowdfunding by the Nancy Astor Statue Appeal.

However, not everybody is happy with the statue. Some campaigners have accused Lady Astor of being anti-semitic, anti-Catholic and even a Nazi sympathiser and argued she should not be celebrated with a statue.

Her supporters say that while some of her views are "difficult to swallow by modern standards", they say many people held similar views at the time and that she was singled out for criticism because she was a woman.

Votes for women: The superheroes who fought to change the law

Equal rights: Quick look at women's votes around the world