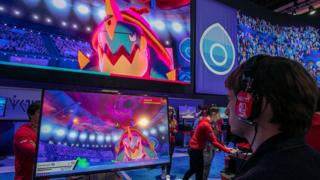 Have you played Pokémon Sword and Shield yet?

Well if not you will probably heard of it as it's become Nintendo's fastest-selling switch game of all time.

Believe it or not the game was only launched last week - and already six million games have already been sold.

Find out loads more about Pokemon and Nintendo

Do you play video games with your parents?

What is all the fuss about?

In Pokémon Sword and Pokémon Shield, players go on a journey through the Galar region, where they'll catch, battle and trade a variety of Pokémon.

They'll also meet a lots of different characters and unravel the mystery behind the Legendary Pokémon Zacian and Zamazenta.

The games also introduce players to some brand new characters and ways to battle. 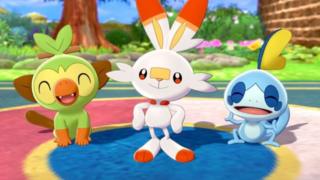 Pokemon / Nintendo / Game Freak
Players can select to be Grookey, Scorbunny or Sobble

Have you had a go yet? What do you think of the games?

Let us know what you think in the comments below.

Pokémon Sword and Shield: The launch and what to expect