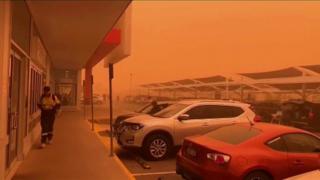 A dust storm in an Australian city has turned the sky red.

The city of Mildura in southeast Australia was hit by winds reaching up to 40 kilometres per hour around midday on 21 November as temperatures hit nearly 40 degrees.

The incredible winds created a dust storm which was strengthened by the same conditions that contributed to the bushfires sweeping across the Australian states of New South Wales and Queensland.

Discover more on the Australian bushfires 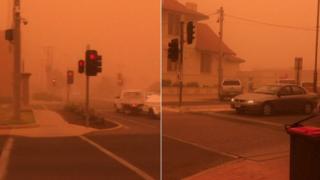 The dust has made it difficult for people to see.

Some living in the affected areas have said the storm is one of the town's worst in years, while others have noted a recent raise in the number of storms.

The dust is thought to be the topsoil which has been loosened as a result of a drought in Australia. Parts of the country haven't seen rainfall for a long time and the extreme conditions have been linked to climate change.