What did Johnson and Corbyn say in the first TV debate? 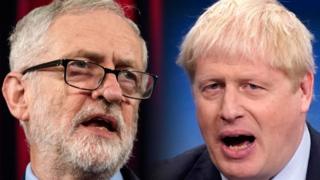 Jeremy Corbyn and Boris Johnson have debated on TV for the first time ahead of the general election on December 12.

Other party leaders weren't invited to take part in the debate.

But both parties lost their legal challenges.

Here is everything you need to know about what happened in the first election television debate. 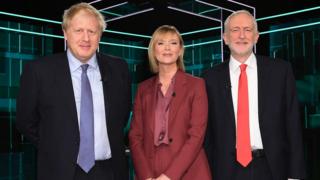 The first half of the debate was dominated by Brexit.

Boris Johnson wants to win the election with a majority so he can take the UK out of the European Union, with the deal he's already agreed, by January 31 .

A majority means one party winning more than 50% of seats in the House of Commons that allows them to form a government.

Jeremy Corbyn wants to tear up Johnson's deal and agree a new deal with the EU. He has said he will let the public decide whether they agree with the new deal through another referendum. 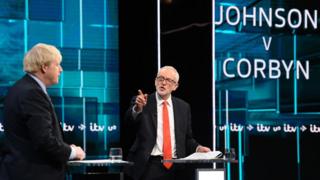 Mr Corbyn claimed that the Conservative Party is planning on letting United States health companies have access to the NHS after Brexit.

"You are going to sell our National Health Service out to the United States", he told the prime minister.

In response, Mr Johnson said the claims were "absolute invention" and that there are "no circumstances whatever in which this government or any Conservative government will put the NHS" in any trade deal. 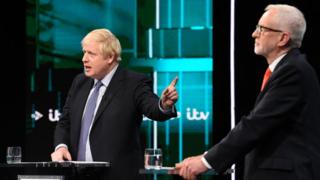 The two party leaders debated over what would happen to Scotland after Brexit.

In 2014, the Scottish public voted over whether they wanted to become independent from the United Kingdom. They decided to remain in the UK.

The SNP is campaigning for another vote on the issue this election.

Mr Johnson claimed Labour would agree to another referendum on Scotland to get the support of the SNP in the election.

Labour would be in a better position to form a government if they had the support of the SNP who were the most popular Scottish party in the last election.

However, Mr Corbyn said the PM's comments were "nonsense" and said his party would not form a coalition between with the SNP. 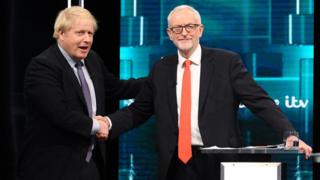 Both party leaders were questioned on the "toxic" atmosphere in parliament in recent months.

Mr Johnson said it had been caused by MPs refusing to agree on a deal for the UK's exit from the EU.

Mr Corbyn replied by saying "trust is something that has to be earned and as a public representative you have to listen".

He said his style of leadership was to "listen to people and try to bring consensus".

Both men then shook hands after the host of the programme, Julie Etchingham, asked them to "make a gesture" to improve the tone of the debate. 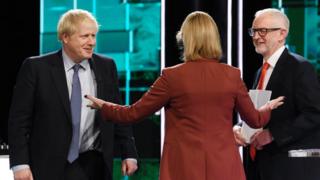 The final question was about what Christmas presents the leaders would get each other.

Mr Corbyn said he would give Mr Johnson a copy of Christmas Carol by Charles Dickens "and then he can understand how nasty Scrooge was".

Election debate: What is the leaders' TV debate all about?