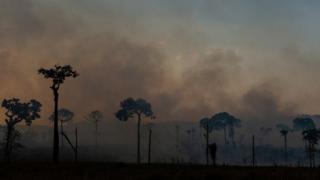 The Amazon rainforest is disappearing at a record speed.

Deforestation in the Amazon is up by 30% on last year - its highest rate for more than 10 years.

The Brazilian Space Research Institute (INPE) released figures on Monday, showing the amount of forest lost between August 2018 and July 2019 reached 9,762 square kilometres - an area half the size of Wales.

The Amazon fires: All your questions answered

How a 'football pitch' of rainforest is cleared every minute 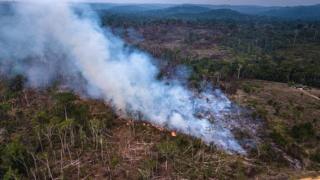 And these new figures do not include the huge areas of the rainforest lost to fires after July 2019.

But Brazil's president, Jair Bolsonaro, has described INPE's report as a "lie".

Why doesn't President Bolsonaro agree with the figures? 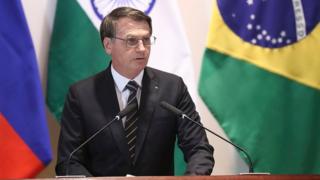 Jair Bolsonaro claims that the figures from the INPE are a lie.

But conservationists around the world say Mr Bolsonaro and his government are turning a blind eye to farmers and loggers clearing land in the Amazon - speeding up deforestation. 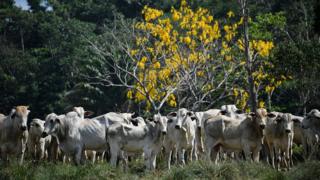 People have also blamed his new government policies for causing an increase in the Amazon fires.

This is because Bolsonaro eased regulations that protected parts of the Amazon so that he could make room for more areas to raise cattle and grow crops, in order to increase Brazil's economy.

Deforestation is the deliberate destruction of rainforest to make way for areas for human use, such as farmland for cattle, crops, or wood to be used for building.

This is known as the 'slash and burn' technique. 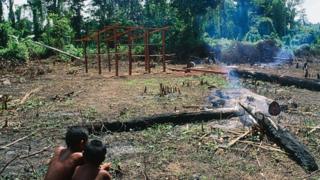 Greenpeace Brazil's Cristiane Mazzetti spoke about the president's decisions saying: "His administration is trashing practically all the work that has been done in recent decades to protect the environment and end deforestation."

Bolsonaro denies his policies have had a negative impact on the Amazon and claims that the fires were "below the historical average".

However, there's evidence that the Amazon fires are linked to an increase in deforestation, according to a report by scientists at the University of Lancaster and the Universidade Federal do Pará, Brazil, published in the Journal of Global Change Biology. 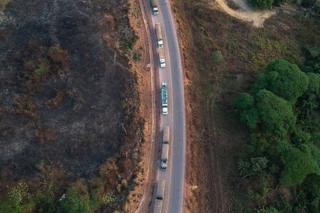 Getty Images
This photo shows the Amazon burnt and destroyed on one side whilst the other side remains green.

To make a difference to these figures, deforestation must be drastically reduced.

Brazil's Environment Ministry officials say they will meet the Amazon region's governors later in the week to discuss how they can do this, according to news reports.