Taylor Swift's been cleared to sing her own songs 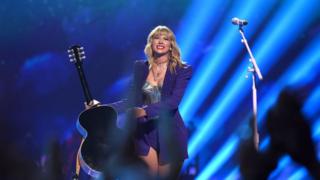 Taylor Swift's been cleared to sing her own songs at the American Music Awards.

But why couldn't she sing them in the first place? On Twitter she told fans she wasn't allowed to sing a medley of her hits after being stopped from performing her old songs by her old record company - Big Machine Label Group.

She said her old bosses Scott Borchetta and Scooter Braun told her "I'm not allowed to perform my old songs on television because they claim that would be re-recording my music before I'm allowed to next year".

But after a row that's lasted a few months, the singer has been cleared to perform her music.

Why is Taylor Swift in a fight over her music?

Why is Taylor Swift re-recording her old albums?

On Monday former record company Big Machine said it was ok for Taylor to sing Shake It Off and her other big hits at the awards.

It had been made clear that Taylor could perform the songs during a live broadcast, but the issue would come after it had been on television.

Now Big Machine have released a statement and said they have come to a "licensing agreement". 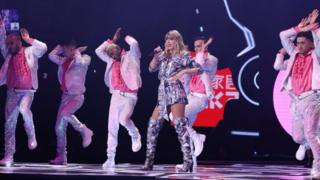 Getty Images
Taylor had said that Scotter Braun was a "bully"

During the disagreement, Taylor had claimed that Scooter Braun was a "bully" and that she was "grossed out" by him owning her work.

But other stars like Justin Bieber and Demi Lovato had come to his defence.

The American Music Awards will be on television next week, and Taylor is expected to win the Artist of the Decade award.