People can vote to name a new planet! 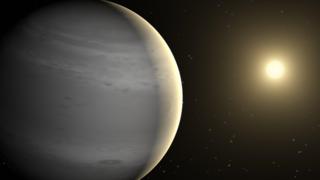 Planet Shaogal? Or planet Delwyn? What do you think of these names?

They're just some of the options the public can choose from to call an exoplanet.

It's part of a competition by the International Astronomical Union to celebrate its 100th anniversary.

Last month, hundreds of UK schools submitted ideas for the planet name, which have now been cut down to a top ten list by a team of astronomy experts.

How do you measure how big space really is?

Here's what happened when scientists sent some slime into space 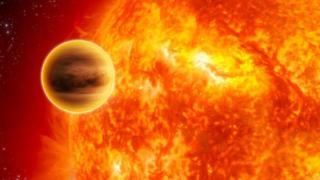 ESA/C.Carreau
An artist's impression of an exoplanet similar to WASP-13b
What is an exoplanet?

All of the planets in our solar system orbit around the Sun. Planets that orbit around other stars are called exoplanets.

WASP-13b is a large, gaseous planet which takes just four days to orbit its sun, WASP-13.

This star is more than 740 light years from Earth and is similar to the Sun, although it is likely to be larger, hotter and older.

These are mountains in the UK that reach up from our country towards the skies.

Both these names come from the Scottish Gaelic language where Shaogal is the word for "world" while Breagha means "beautiful".

In Welsh, Delwyn means "godly friend" while Ceridwen was the Celtic goddess of rebirth, transformation, and inspiration.

Historic ancient monuments on the Isle of Islay, Finlaggan was the ancient seat of the Norse/Gaelic Lord of the Isles and Dunyvaig was the naval fortress.

These are Dark Sky Parks and some of the best areas in the UK to view the night sky.

In Manx Gaelic, Gloas means "shine" while Cruinlagh means "orbit", describing what the exoplanet and star are actually doing.

Using the theme of UK flowering plants, the poppy gives us hope for a peaceful future while the thistle stands for bravery, determination and strength.

Robert Recorde was a famous Welsh mathematician who invented the equals sign which is "Hafal" in Welsh.

These are the two main types of rock used in the construction of Stonehenge, drawing attention to the bridge between the ancient and modern world.

What name would you choose? Let us know in the comments below.