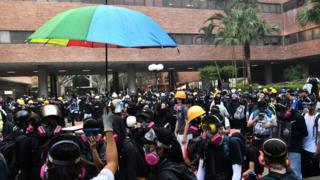 Getty Images
Protestors face being arrested if they leave the university building, but people who are under 18 have been allowed to leave without charge

About 100 protestors are still inside a university in Hong Kong.

They had camped inside a university building as part of the ongoing protests, but police surrounded the area making it difficult for them to get out again.

There has been some violence, including objects being thrown at police.

Police have responded with teargas and plastic bullets.

Those inside of the university building are said to be running low on supplies, but are likely to get arrested if they walk out.

Protestors under the age of 18 have been allowed to leave.

What is Hong Kong's 'Umbrella Movement'?

Schools in Hong Kong closed due to fears of violence

Protests have been going on for a while in the region, they started because of something called the extradition bill, but that's now been scrapped.

Now protestors are demonstrating over issues linked to democracy, human rights and their treatment by the police. 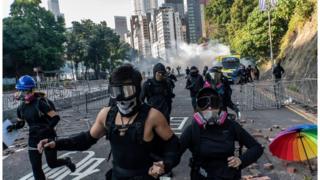 BBC reporter Gabriel Gatehouse, who was there to see what was happening said there was a game of "cat and mouse" with police.

"The protesters...respond with petrol bombs and rocks fired from improvised catapults. The police vehicles retreat." 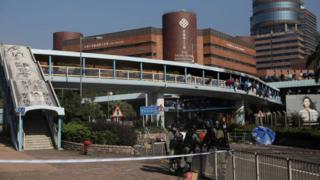 When a group of protestors tried to leave Polytechnic University by a tunnel entrance, police fired tear gas and a number were arrested.

Others from the group then retreated to the campus.

Police officers had previously said protesters could leave the campus via Cheong Wan Road South Bridge, but urged them to drop their weapons and remove their gas masks.

Demonstrators have been inside the Polytechnic University for a few days, as part of the protests.

All of the classes there have been cancelled for the rest of the term.

Hong Kong protests: What is the 'Umbrella Movement'?

Hong Kong protests: What's happening and why are people angry?