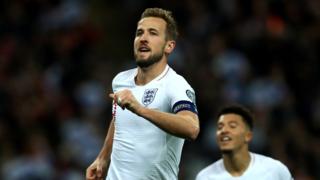 England have qualified for Euro 2020 after beating Montenegro 7-0 at Wembley in their 1000th game.

Alex Oxlade-Chamberlain scored the first goal and Marcus Rashford scored after Harry Kane's first two goals in the first half.

A brief history of the football

The unusual ways your football club is helping the environment

Aleksandar Sofranac scored England's sixth goal in the second half.

The seventh goal came from substitute Tammy Abraham with his first goal for England.

This was England's youngest starting line-up for 60 years, with an average age of 23 years and 255 days. 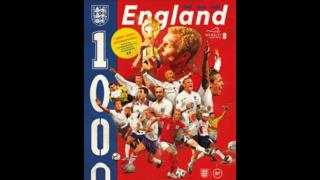 As well as the incredible victory against Montenegro, England also marked a milestone on Thursday night as the team celebrated the 1000th game in the team's history.

The official matchday programme also celebrated the moment, with an illustration showing players from over the years.

England travel to Pristina to take on Kosovo in their final Euro 2020 qualifier on Sunday, 17 November (17:00 GMT).

Euro 2020 will be played out across 12 host cities in the first European Championship to be staged in more than two countries.

Although the draw has not taken place yet, we know England will be in Group D at the Euros.

By qualifying automatically, the Three Lions ensured they will play all three group matches at Wembley - on Sunday, 14 June, Friday, 19 June and Tuesday, 23 June.