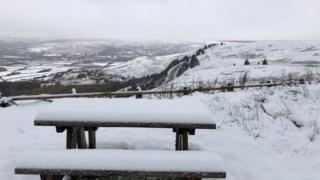 A layer of snow covers the mountains near Rhigos

Snow has fallen in some parts of the UK, causing trouble on the roads.

Areas like Gloucestershire, parts of Wiltshire, Bath and South Wales have seen a few centimetres of snow fall.

A yellow weather warning has been in place in some areas, with local services asking people to take care when travelling.

Some trains, cars and planes have been delayed by snow too. 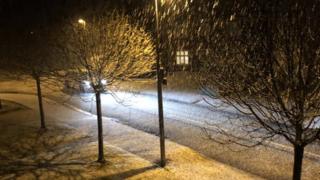 There have been no reports of schools closing because of the snow.

Weather experts have said there may be more snow in areas where the ground is higher, like the Peak District and Brecon Beacons.

However, the snow might soon turn to rain in places like Nottingham, Sheffield and Doncaster as a yellow weather warning for rain is in place.

These are areas which have already been affected by heavy flooding.

UK floods: We talk to kids affected in Doncaster

Cheshire's mini tornado and more weird weather around the world