McDonald's is going to start recycling their plastic toys 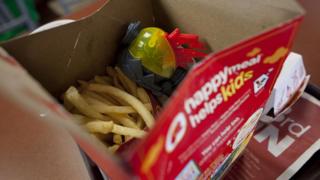 McDonald's is going to start recycling their plastic toys!

The fast food restaurant is going to put collection bins in some of their restaurants and said the plastic will be melted down and turned into new things like coffee cups.

McDonald's said customers will also be able to recycle plastic toys from other retailers, as long as they fit into the special recycling bins.

There's lots of pressure on companies to reduce plastic use, and lots of you are getting involved in asking them to cut back..

Ella and Caitlin gathered more than 400,000 signatures, and in response to them, McDonalds said its customers would be able to choose between a toy and a fruit. 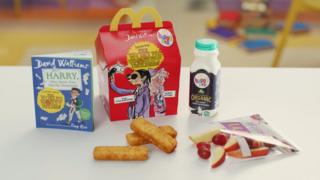 McDonald's
McDonald's says it will still have toys in its Happy Meals, but toys can be swapped for fruit, or recycled via the new bins

McDonald's is testing this scheme in a few restaurants in the UK and Ireland, but they said if it's successful then they'll roll it out to all of them.

Lots of other companies are making an effort to reduce plastic waste, and some have even said they'll go glitter free this Christmas to try and help the environment.

Plastic: Are too many plastic toys given away in kids meals?