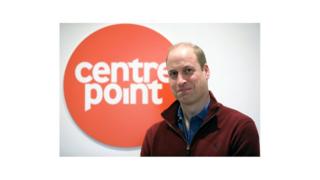 The Duke of Cambridge has spoken out about youth homelessness on a visit to the charity Centrepoint.

Prince William was in south London to mark 50 years since it opened.

The organisation helps young people who are homeless and are searching for work and accommodation.

He said "it is upsetting that in 2019 we still have not managed to end youth homelessness, but it is reassuring to know that when young people are at their lowest point, Centrepoint's team are there to help."

Prince William has been patron of the organisation since 2005 which works to help young people who are homeless.

His mother, Princess Diana used to be patron and took him and his brother Prince Harry on private visits there.

He met the young people who will live there and companies who are giving them apprenticeship training to help get them into full time work.

William and Kate visit Newsround to talk about mental health