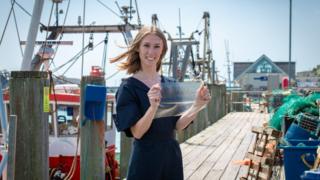 The designer of a bioplastic which is made up of fish waste has won an important design award.

Lucy Hughes has won the International James Dyson Award for MarinaTex, an alternative to single-use plastics.

Her project began as an investigation into ways of reducing fish waste, around 50 millions tonnes of which is produced globally each year, the United Nations estimates.

The product is see-through and strong, which means it could be used for things like sandwich wrappers and bags.

Unlike plastic which can hang around in the environment for hundreds of years, it will break down in home compost or food waste bins within four to six weeks.

From wool to cactus leaves: What do you think of these plastic alternatives?

And it's even edible - if people aren't put off by the fact it's made out of fish scales!

To create a strong material, Lucy Hughes added the molecules chitosan from crustaceans, like crabs and lobsters, and agar from a type of marine algae, to her scales-and-skin mixture.

She said: "When I felt the skins and the scales in my hands, I could see that there was potential locked up in it. It was so flexible, yet pliable and strong."

Lucy plans to use the 32,000 pounds ($41,000) of prize money to further develop the product and get it ready for mass production so it can be widely used.