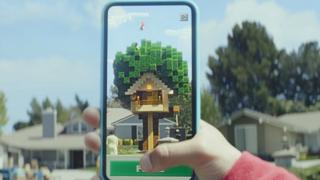 Minecraft is a step closer to being playable in the real world with the launch of an early access version of Minecraft Earth.

The mobile augmented reality game by Microsoft and Mojang, announced in May, is now available in the UK as an app on Apple and Android devices.

Crafters can still build their own worlds but now - in a similar way to Pokémon Go - players can collect materials at locations in the real world.

You can open your build to friends and ask them to help out, or even allow others help themselves to materials in your construction.

Loads more gaming stories for you

Sonic the Hedgehog is back - check out his new look!

All you need to know about Minecraft's amazing history 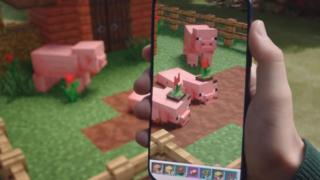 There's also an adventure mode where lots of people can join multiplayer experiences which can be either task, challenge or combat-based.

Microsoft and Mojang are hoping the new game will take augmented reality to another level - even further than games such as Pokémon Go and Harry Potter: Wizards Unite.

What is augmented reality?

AR, or augmented reality, is when the real world and virtual reality are combined using computer software.

The real object or person is captured on camera and then appears in a virtual world.

AR isn't just used in gaming. Doctors and surgeons often use it to practice complicated surgery to help cut the risk of mistakes during the real-life operation.

To play the game, users will need a smartphone that can run at least iOS 10 or Android 8, as well as having an Microsoft or Xbox Live account.

Have you played the game yet? What do you like about it? Is it what you expected? Have you had any problems playing it?

Minecraft: Stampy and Netty Plays tell us all about Minecraft