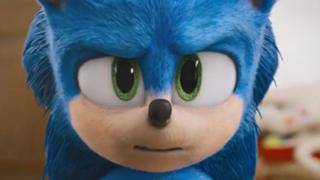 Sega fans everywhere can breath a sigh of relief as they watch the new Sonic the Hedgehog trailer.

The new trailer, released on 12 November, features Sonic's new CGI character, that the Paramount team have been working on for months.

This is the second released this year.

The first trailer triggered a lot of criticism from fans about how Sonic looked.

Do you think there should be a limit on gaming time?

Many Sega fans complained it didn't look like the original character and disliked his human teeth and small eyes.

As a result, Sonic's CGI make-over has attracted a lot of attention to the film's new trailer.

Gaming fans have said that the new, improved Sonic looks a lot more like the character that we all know and love.

The most obvious change is that his eyes are a lot bigger.

His teeth are less human-like and his body is shorter with brighter, fuller fur.

There's no denying that there's a world of difference between the two.

After the long delay, we can safely say that the beloved Sega character will finally hit the screens on 14 February 2020 with greater public approval.

Let us know what you think about the new Sonic in the comments below.