US Message in a bottle gets a reply from France - 9 years later! 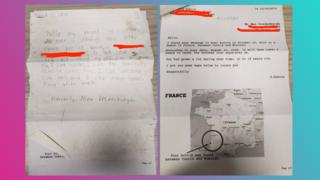 Max Vredenburgh
Max threw his bottle into the ocean in America - and someone's just replied from France!

When Max was 10 years old he threw a message in a bottle into the ocean in America - and someone's just replied to him from France!

Max, who now lives in Massachusetts in America, put his letter into a glass wine bottle in August 2010.

He threw it into the water at Long Beach, near Boston.

Max's dad got in touch with him recently to say he'd received a reply to the letter.

More amazing message in a bottle news for you

Message in bottle washed up in Oz

'Oldest' message in a bottle found

He said the person was called "G Dubois" and that they'd found the bottle on a beach on the Atlantic coast in southern France on 10 October this year.

In Max's original letter he listed some of his favourite things; like apples, the beach and outer space, and asked that whoever found the letter to "please write back". 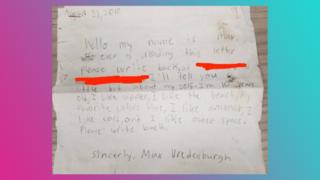 G Dubois included maps in his letter to show Max where he'd found the bottle.

Max posted the photos on Twitter and said he's going to reply to G Dubois, he promised to keep his followers updated!

Message in a bottle: 50-year-old note found in Australia before writer is tracked down