Therapy animals: From dogs to pigs - what are emotional support animals? 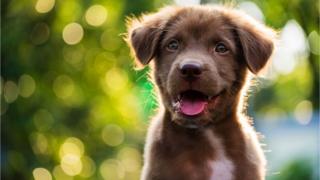 Animals have helped humans in lots of different ways over the years.

They've inspired us to invent some of the tech we use today, and some of the medicine we take, as well as helping to keep us safe.

But as well as this, some animals are helping people who are anxious to feel calmer.

They're called emotional support animals. Some animals can even become therapy animals, who are specially trained to help people in stressful situations.

30 animals that have made us smarter

Play our quiz: Do you know how clever animals can be?

What is an emotional support animal?

An emotional support animal is an animal which provides its owner with comfort and support during stressful situations.

Some people can struggle to do things like flying on a plane, or taking an exam because of severe anxiety.

They can reassure and comfort these people, and help ease their stress.

According to Dr Christine Rhodes, a lecturer in health and social care at the University of Derby, having emotional support animals around is linked to "decreased depression" and reduced blood pressure.

She said: "Studies also show that interacting with animals can increase the stress-reducing hormone oxytocin and lower cortisol (stress hormone) levels, which helps us to calm down and feel more relaxed."

Are emotional support animals allowed in the UK?

Despite being allowed in most places in the US, emotional support animals are not given the same legal recognition in the UK.

Some UK airlines will allow some dogs on board for emotional support, but not other animals like cats or rabbits.

Between 2017-18 United Airlines in the US saw an increase of 75% in people requesting to travel with emotional support animals.

Animals such as a turkey, miniature horse cats and dogs have all travelled with their owners.

However, some places in the US have recently started cracking down on what kinds of animals are allowed to board planes and enter public places, after someone tried to bring a peacock onto a plane, and a kangaroo into a restaurant. 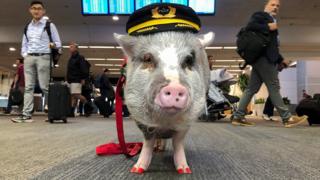 Reuters
Lilou is a therpay pig - check out her hat!

Some animals can receive special training to become therapy animals to help comfort people with stress and anxiety.

They can help people at airports, just like Lilou!

San Francisco International Airport are using a pig to soothe passengers who are feeling nervous or stressed about flying.

LiLou's a Juliana breed therapy pig who wears a pilot's hat and "Pet Me" badge around the airport.

Pets can help people at schools and universities too, like this puppy room at Aberdeen University. 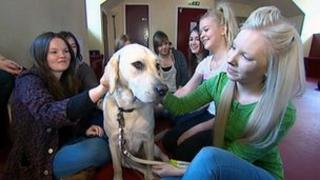 It's a room where stressed students can calm their pre-exam nerves.

The dogs are provided by the Guide Dogs for the Blind Association, who say that the interaction helps prepare the pups for life as seeing-eye dogs.

Cute dogs: Our cheeky pets use their eyes to make us do what they want!

Which purr-fect cat has been crowned National Cat of the Year 2018?