Mouse-deer not seen for 30 years photographed in Vietnam 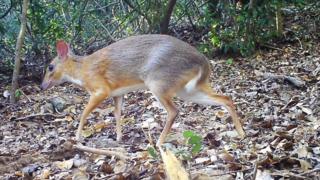 A tiny creature that looks part-deer, part-mouse and hasn't been seen in nearly 30 years has been caught on camera in Vietnam.

The silver-backed chevrotain, also called a mouse-deer, was captured on camera traps.

The animal looks like a deer, but is the size of a cat. The species was first described in the early 20th century and again in 1990.

But since then, the silver-backed chevrotain had been "missing."

"There was no reason to think that it was extinct, but at the same time, we didn't know that it wasn't extinct," says An Nguyen, a conservation scientist at Global Wildlife Conservation (GWC) and a student at the Leibniz-Institute for Zoo and Wildlife Research.

To solve the mystery, researchers left three camera traps in a field in Vietnam for five months and were able to get 275 photos of the species.

The rediscovery of the silver-backed chevrotain - also known as the Vietnamese mouse-deer- is the first rediscovery of a mammal on GWC's 25 most wanted lost species list. 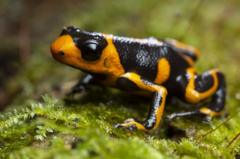 The Seven Worlds, One Planet team answer your questions!