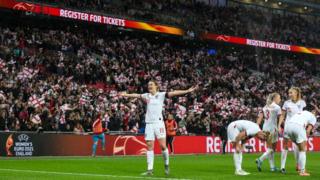 The England Lionesses were beaten 1-2 by Germany in front of a record-breaking 77,768 fans on Saturday.

The Wembley crowd became the largest ever to watch a British women's international team on home soil - the previous record was 70,584.

However, England struggled against the two-time world champions, with Klara Bühl scoring an injury-time winner.

England's goal-scorer Ellen White said after the game, "It's unbelievable - the support, the noise, the atmosphere - we are really sorry we couldn't get the result.

"It's a dream come true to play at Wembley for your country and score," she added. 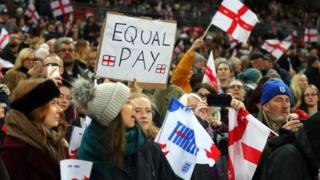 The attendance of over 77,000 narrowly missed out on setting an overall record for a women's football fixture in the United Kingdom.

That remains the 80,203 who were at Wembley for the Olympic final between the United States and Japan in 2012.

It is just under two years until the start of the Uefa European Championships, which are taking place in England.

But, if the Lionesses want to win that tournament on home turf, they're likely going to have get past the Germans.

Germany have won the Euros a staggering eight times and are the highest-ranked European side in Fifa's women's world rankings. 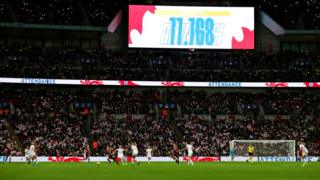 Were you in that record-breaking crowd? If so, let us know! What was the atmosphere like?