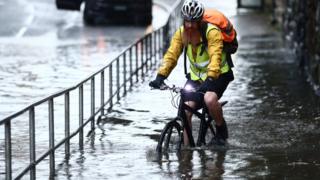 Over 100 flood warnings are in place across the north of England.

Hundreds of people were stranded in a shopping centre after heavy rainfall caused flooding on the streets of Sheffield.

Shoppers at Meadowhall shopping centre there on Thursday night were told by police to stay put after flooding blocked surrounding roads.

Thousands had gone for its Christmas Live event with singer Ella Henderson and Jonas Blue, but the event was cancelled at the last minute.

On social media on Thursday night Meadowhall wrote: "There are a small number of people who have chosen to stay with us for now. We'll continue to look after them until they can return home safely."

A major incident was called in the South Yorkshire city which was one of the worst affected by the heavy downpours across the UK.

The Environment Agency has issued five severe flood warnings to places along the River Don.

People are being told to leave their homes in the villages of Old Kirk Sandall, Barnby Dun and Sandal Grove near Doncaster after the River Don burst its banks. 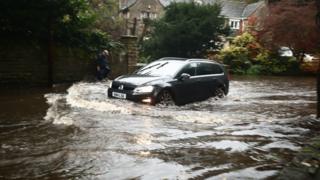 Getty Images
Lots of roads in Sheffield were flooded

People living in Rotherham were told not to leave their home unless "absolutely necessary" and firefighters had to rescue people by boat who were stranded in the Parkgate shopping centre.

On Thursday, 35 homes in Mansfield, Nottinghamshire, were evacuated following a mudslide caused by torrential rain.

According to the forecast from the Environment Agency, the River Don at Doncaster is predicted to reach its highest recorded level later on Friday.

The weather has also caused train services to be cancelled in the north of England.

How well do you know your weird weather?