Mammoth traps have been discovered in Mexico 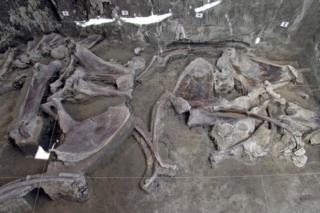 At least 14 mammoth skeletons have been discovered in human-built pits in Mexico.

Researchers from Mexico's National Institute of Anthropology and History (INAH) believe it is the first-ever find of a mammoth trap set by humans.

Around 800 bones were found in total in pits about 1.7 metres deep and 25 metres in diameter.

Early hunters may have herded the elephant-sized mammals into the traps using torches and branches more than 14,000 years ago.

Is this the return of the woolly mammoth?

Anybody want to buy a mammoth?

Some of the bones show signs that the animals had been hunted.

Archaeologists thought early humans only killed mammoths if the animals were trapped or hurt.

But the discovery of the traps could show that hunts were planned.

Researchers said at least five mammoth herds lived in the area of the find.