The Bloodhound supersonic car has reached a speed of over 500 miles per hour (mph)!

It's managed 501 mph to be precise in high-speed trials in South Africa.

The jet-powered car, driven by pilot Andy Green, is working towards breaking the land speed record.

The Thrust car broke the sound barrier in the process - the first, and only, car to have done that.

If something breaks the sound barrier, that means it's reached a speed that is faster than the speed of sound.

What makes the car so fast? 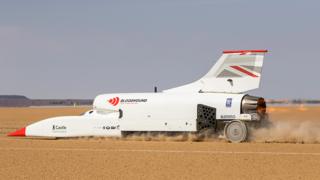 The Bloodhound car has been made to go much faster than ordinary vehicles you'll see on the roads.

The shape is designed to be aerodynamic, which means it moves through the air faster.

The world's 'fastest' car and other speedy vehicles

Is this kid the next Usain Bolt?

It also has a Eurofighter jet engine onboard which brings it to speeds of 500-600 mph. The addition of a rocket motor in 2020 could take it to over 800 mph!

For comparison, the top speed of a Formula One car is just over 200 mph and commercial aeroplanes usually fly at 460 - 575 mph.

While the Bloodhound car's current aim is beating the land speed record, its ultimate goal is to reach the staggering speed of 1,000 mph!

Electric vs fuel: why the government is encouraging more people to switch to electric cars

Electric cars: Racing the cars of the future