Anti-Bullying Week: 'Change starts with us' 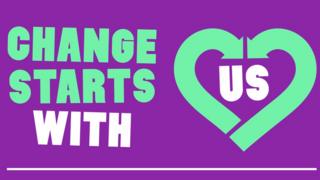 Anti-Bullying Week is taking place from Monday 11 to Friday 15 November and this year the theme is 'change starts with us'.

And children have been sharing what they want to change - a new poll suggests that many miss school and avoid spending time with friends to escape bullying.

The Anti-Bullying Alliance - a group of organisations which work together to tackle bullying - have done a survey of over 1,000 11 to 16-year-olds.

It shows that the scale of bullying that children are experiencing on a day-to-day basis. Nearly a quarter (24%) say they have been bullied once a week or more during the last six months.

Nearly one child in every classroom (3%) said they are bullied every day. One in ten children (11%) said they have missed school due to bullying.

What do the stars have to say?

Olly Murs talks about his experience of bullying

The Anti-Bullying Alliance worked with 1,000 children to choose this year's theme of 'change starts with us'. It was picked in order to promote the idea of working together to challenge bullying, to help people to start a conversation about it, and to help put an end to bullying altogether.

Children highlighted where they thought change should start, with over three quarters (76%) of those polled saying that social media and gaming platforms should do more to change the way they address bullying, and nearly half (48%) saying their schools should do more.

More than four in ten (44%) of children said that the media and influencers had the power to reduce bullying.

Lots of events will be taking place in schools across the UK to mark the week.

On Tuesday 12 November, lots of children will be wearing odd socks to raise awareness of the campaign.

The idea behind this is that it celebrates the fact that everybody is unique and different.

'I was cyberbullied by my best friend'

Find out more about the new Own It app

It can come in many different forms.

When bullying takes place online - for example, via social media or video games - it is called cyberbullying. This form of bullying has become more common, as more young people have mobile phones and computers than they used to.

Often, bullies behave like this to make someone else feel sad, scared or alone, or to gain a sense of power over the person they are bullying.

It can often start when a bully picks on somebody because something about them is different.

Anti-Bullying Week aims to put a stop to this. One of the ways it hopes to do this is by making everybody realise that differences are something to celebrate.

You can find out more about why people bully with BBC Own It. 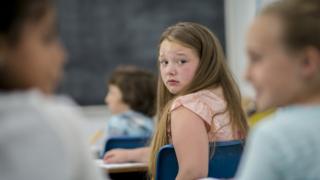 Getty Images
When does bullying happen?

Bullying can happen either inside or outside of school hours.

It can take place in person or online, via social media or video games.

Whether it is verbal, physical, online or in-person, bullying has a significant impact on a child's life well in to adulthood. By making small, simple changes, we can break this cycle and create a safe environment for everyone. Because together, we can challenge bullying. Change starts with a conversation. It starts with checking in. It starts with work together.

BBC Own It has lots of advice too:

There is also a special area on the Childline website with lots of help and advice.

Why 'bullying' now means something different

Anti-bullying Week: Jordan Pickford says 'be a buddy, not a bully'

"Bullies need to understand what they have done"

Missing Strictly? A new ballroom show is on the way!