A DNA test has found that an abandoned puppy found in Australia is not a dog- he is in fact a rare pure-breed dingo!

Wandi the dingo, who is less than a year old, was found in a back garden in a small town near Melbourne in Australia.

The baby dingo had a few scratches on his back which experts think could be from a large bird of prey - but he is perfectly healthy.

Wandi has been moved to a sanctuary to help endangered species and experts believe what they learn from him could help his fellow dingoes to survive.

Why is it so hot in Australia?

What is a dingo? 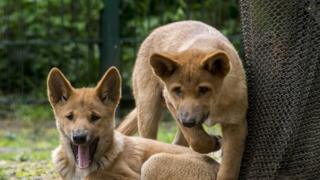 Getty Images
So...What is a dingo?

A dingo is a wild dog that lives mainly in Australia but a few can be found in Southeast Asia.

Dingoes have bushy tails, are either golden or reddish in colour and can weigh up 20kg as an adult.

Although they often live alone, they can also sometimes be found in small packs.

They communicate with other dingoes by howling like wolves.

For us he is going to be a very valuable little thing depending on his eventual development and the way he continues to get along with everybody else in the sanctuary. 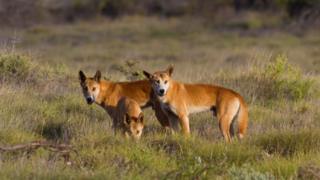 Dingoes are not like a dogs that you may have as a pet as they are wild and not domesticated- they tend not to live with people.

They have longer ears and a longer muzzle (nose) and their canine teeth are thinner inside and their molars are stronger.

A dingo prefers the night time to roam around whereas, our dogs at home prefer the day time.

Why are dingoes important? 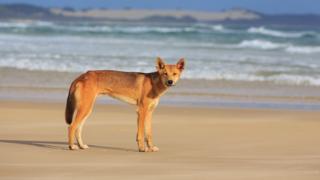 Dingoes are predators and play an important role in the eco-system in Australia in keeping the population of animals like kangaroos down.

Pure breed dingoes are now very rare as they have bred with other species - like dogs.

As dingoes are currently endangered, there is a risk they could become extinct.

Hopefully Wandi can help the dingoes in making a comeback!