Berlin Wall anniversary: Stories from the wall from those who remember 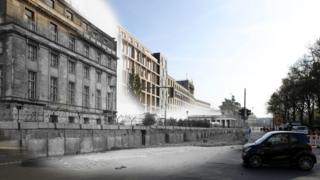 Getty Images
This special photo shows two pictures put together, taken in the same place - the black and white part of the picture shows the Berlin Wall in 1966 at Scheidemannstrasse near the Brandenburg Gate (which was right on the border between East and West Berlin), while the coloured part of the photo shows this same place in October 2019

On 9 November 1989, something happened which would change history. The Berlin Wall - which had separated the German capital for almost 30 years - finally came down.

Family and friends who had been divided by the wall were finally able to cross the border and see each other again.

There were scenes of great celebration, as thousands of people from East Germany flooded across to the western side of the city - something they had only dreamed of doing freely for many years.

Newsround has been talking to people who remember this moment in history to find out what it meant to them.

Find out more about the Berlin Wall

Why was it built in the first place?

In pictures: When the Berlin Wall came down

Six famous walls that have made history

Jamie Gordon - who is now 51 - was 18 when he moved to Berlin with his parents. He lived and worked on the west side of the wall, working as a reporter for British Forces radio.

"I remember the East being 'black and white', cold, deserted and sad," he told Newsround. "Yet in the west of the city, it was vibrantly colourful, exciting and full of people from lots of different countries. The contrast was remarkable.

"I remember the music and all the world's stars wanted to come to Berlin. I was in the lucky position of seeing and meeting them through my work." 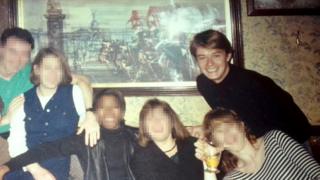 With permission from Jamie Gordon
This photo shows Jamie with his friends, at the age he was when the Berlin Wall came down (21 years old)

"I was 21 and presenting on the radio on the night of the 9 November 1989," he said. "It was Berlin's turn to host the late night show from 10pm until midnight.

"I remember receiving calls from people saying something was happening near the wall but I was unable to talk about any of it on the radio, because it was a difficult and sensitive issue and I worked for a military radio station. I left work at midnight and went home." 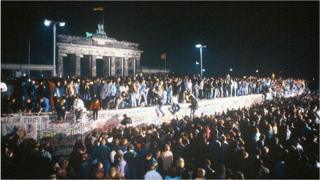 "The following morning I woke to find one of my colleagues in my bedroom telling me to get up. 'You are presenting the lunchtime show because the Wall has fallen!' they said.

"All of us were sent to various parts of the wall and into a helicopter to start gathering stories and news that would be used across the world, including by the BBC. We were the centre of the world's attention for several weeks!" 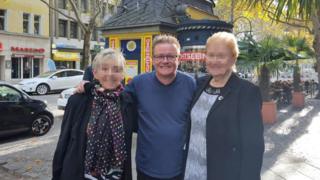 "I remember the euphoric happiness throughout the city and also the queues at banks because each East Berlin resident coming to the west was allowed to receive to 100 German marks (£44) as what they called 'welcome money'.

"There were also queues at supermarkets where they were able to buy certain foods that were extremely rare in the east, like bananas.

"I'm very thankful I was there to watch one of the most important events of the 20th Century play out on my doorstep." 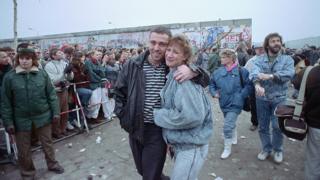 "I lived on the island of Hiddensee in the Baltic Sea in East Germany. Life was good before the construction of the wall and without any particular problems," he told Newsround.

"But after the construction of the wall, life became hard and bad. Many things were forbidden - no press, literature, music and television from Western countries. There was no freedom to travel. The secret state police controlled residents of East Germany and people didn't trust each other.

"The city of Berlin was divided. The people of East Berlin were imprisoned and they had no freedom. Many people were detained, injured or killed if they tried to flee."

Despite this danger, Peter made two escape attempts - one in 1968 through Czechoslovakia to get to Austria or West Germany, and again in 1969 via another route - but both failed. 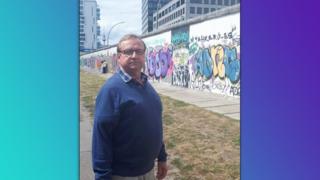 However, on 28 April 1970, he managed to escape from Thuringia in East Germany to Hanover in West Germany by hiding in a cupboard on board a lorry heading to West Germany.

"I got help from an owner of a furniture factory. I was hidden in a wardrobe that was transported in a truck," he said.

After his successful escape, he then helped more people to make the same journey.

"In 1972, I helped 11 people to flee from East to West. They would always be relatives who wanted to be reunited after the construction of the wall. They fled hidden in a tanker truck, which otherwise transported bitumen - a building material."

Even though he had already escaped from East Germany, by helping other people to do the same, he found himself in trouble again.

"I was betrayed to the secret state police during the last escape aid and was sentenced to ten years in prison. After five years in prison, I was freed as a political prisoner by the Federal Government in 1977 for 50,000 German marks." (This is about £22,000.) 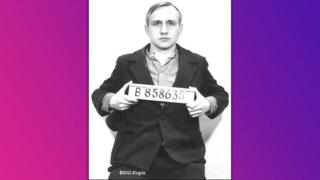 "Such a wall must never be allowed to happen again," he said. "It's important that children understand how good it is to live in freedom. That evil people must not have the power to let others suffer."

The Berlin Wall was built in the aftermath of World War Two. Find out more about this important conflict.

The world remembers the end of World War Two

Dr Inga Burgmann-Zamagni lives in Berlin and works at a school. She was a young child when Germany was divided into two, which was difficult for her to understand.

"As a child I did not really understand that there was such a divide," she said. "I only understood that you could not travel to the other side easily and that there were soldiers guarding this strange wall." 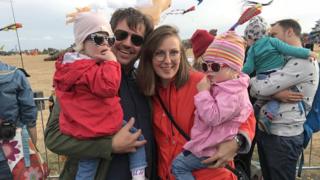 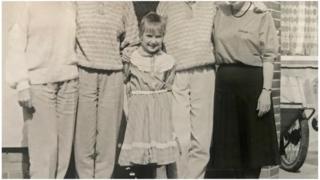 She remembers the day that it came down.

"At the time, I was in my home town - a small village in the Harz. The border that went through Germany between east and west was only 10 minutes away from us.

"We went there on the day and my parents and I helped to take down the wall and fence. We hugged each other and all of the adults were crying. I was only eight years old, though, and did not really understand." 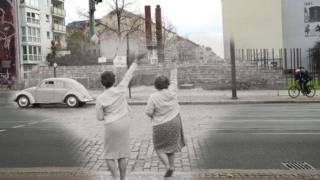 Getty Images
This special photo shows two pictures put together, taken in the same place - the black and white part of the picture shows people in Berlin in 1961 or 1962, waving across to East Germany with the wall in front of them, while the coloured part of the image shows the street now in October 2019 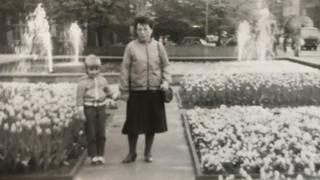 We asked Inga what the wall coming down means to her now.

"It means freedom," she said. "After finishing my A-levels, I have lived in English-speaking countries for more than 10 years. I worked for the charity Doctors Without Borders (Médecins Sans Frontiers) for five years, which would have been impossible before.

"This freedom is part of me and who I am today. Without this, I would be somewhere else today and the school where I now teach would not be here.

"You now have all the possibilities in the world and everyone should cherish this."

What do you think after reading these stories? Let us know in the comments below.