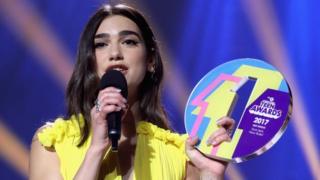 Getty Images
Dua Lipa at the Radio 1 Teen Awards in 2017.

Dua Lipa may be one of the most successful pop stars in the world but she also struggles with the pressures of social media sometimes.

The 24-year-old singer has millions of followers but she says she gets negative comments sometimes and said "some days maybe I feel a little bit more vulnerable and I dive in and I almost go looking for things I don't want to see."

She also said she thinks people should be "nicer to one another".

Dealing with your life online

How does social media effect happiness?

Your thoughts on social media

Other singers like Selena Gomez have also spoken out about social media and how it can be damaging for people her age.

Dua Lipa says she has to log off her social accounts if comments by trolls get too much for her.

She said: "People feel like they can say things because they're hiding behind a computer screen and for me it's important to use social media in bite sizes - as long as it makes me feel good, and the second it doesn't, I like to take some time away from it."

She's encouraging people to be kind to ourselves and one another to make the online world a safer experience. 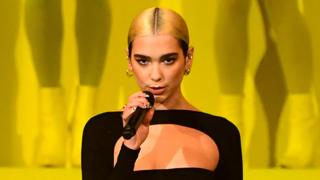 The singer who has won three Brit Awards recently performed her latest single Don't Start Now at the MTV VMAs in Spain.

It comes ahead of the release of her new album which is out next year!

In her BBC interview she spoke about the first song she ever wrote when she was six years old which was dedicated to her mum.

Do you get affected by social media? How do you deal with it? Let us know in the comments below.

Social media 'has a small effect on your happiness'