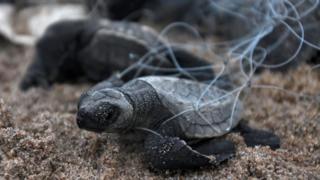 Fishing gear, which has been abandoned and lost at sea, makes up most of the plastic pollution in some parts of the world's oceans and seas, according to a report by environmental charity Greenpeace.

More than 640,000 tonnes of nets, lines, pots and traps used in commercial fishing are dumped and discarded in the sea every year, according to the United Nations (UN). That's roughly the same weight as 55,000 double-decker buses. All of the equipment left in the water is known as "ghost gear" because it's been abandoned.

The plastic can trap large marine animals like turtles, dolphins and seals, sometimes causing them to die painfully.

More on the Ocean

Divers found nets and lines on the side of the 4,600 metre mountain. The peak of it is 26 metres below the water's surface.

Researchers say the equipment could have been there for more than a year. 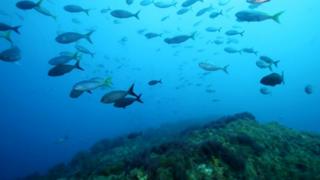 "(Ghost gear) is like a zombie in the water," Greenpeace marine biologist and oceans expert Thilo Maack said.

This pollution kills and injures more than 100,000 whales, dolphins, seals and turtles annually, according to UK-based charity World Animal Protection.

More than 300 endangered sea turtles were killed last year after swimming into a what was believed to be a discarded fishing net in southern Mexico.

Plastic can take up to 600 years to break down, eventually turning into harmful micro-particles that are ingested by fish and end up in people's food.

Greenpeace says urgent action is needed to tackle the problem.

It also wants the Global Oceans Treaty, a worldwide UN agreement, to pave the way for a global network of ocean sanctuaries covering 30% of the world's oceans by 2030.

Climate change: Why have there been more global strikes?