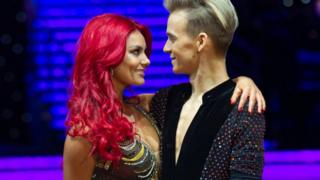 Joe Sugg will be putting the sequins back on and returning to the Strictly Come Dancing floor for the show's Christmas special.

The YouTuber who presents the Strictly Come Dancing official podcast originally took part in the 2018 show.

Joe said: "I'm really excited to have a go on the strictly ballroom floor again this Christmas. Strictly feels like a home away from home for me so I will be giving it my best shot and ending the year on a high."

Sugg joins other popular stars from previous series including reality star Mark Wright, Emmerdale and Hollyoaks' Gemma Atkinson and Chizzy Akudolu who was in Holby City.

Their professional partners will be confirmed later on, but let's hope Joe gets to dance with his former partner and now girlfriend Dianne Buswell!

Which judge shouldn't the Strictly celebs listen to?

Each of the six couples will perform a Christmas inspired routine in a bid to be crowned Christmas champions for 2019.

Although the judging panel, Craig Revel Horwood, Motsi Mabuse, Bruno Tonioli and Head Judge Shirley Ballas, will be there to score each couple, it will be down to the studio audience to vote for which pair will lift the Silver Star trophy.

The Strictly Come Dancing Christmas Special 2019 will be presented by Tess Daly and Claudia Winkleman and will be shown on BBC One on Christmas day.

Fortnite ban for FaZe Jarvis: 'Cheating, in anything, is just terrible'

Joe Sugg: The YouTube star is voicing a character in A Shaun the Sheep Movie: Farmageddon

Joe Sugg is back for Strictly Come Dancing podcast