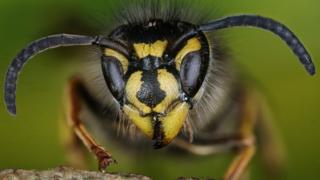 Let's talk about wasps - lots of people aren't fans of the insects and they're known for their aggressive buzzing and vicious stings. Ouch!

However, new research from University College London (UCL) suggests the insects aren't actually as bad as you might think.

The study, which took place in Brazil, shows that common wasp species could play a really important role in managing crop pests.

Researchers found that the insects were able to hunt down pests on valuable crops including maize and sugarcane. It means they can help reduce the pest population and limit the amount of damage done to the plants overall.

Should we be eating more insects? Have your say!

Not only were the wasps able to remove pests on the surface of crops, but they were also able to dig out ones that had buried themselves inside plants.

According to Dr Seirian Sumner, who worked on the study, the use of chemicals to kill pests can end up killing the very insects that provide us with natural forms of pest control. It's clear that wasps have a very crucial job!

Why do wasps have such a bad reputation?

Lots of people are afraid of wasps and some might even have a phobia of the insects. Spheksophobia is the official term for the fear and although the causes are unknown, it may be triggered by a bad experience.

Despite all the negative links, wasps actually have a really useful purpose.

There are over 7000 of the insects in the UK and the most common are the yellow and black ones you've probably seen flying around during the summer.

Wasps are one of the main reasons why we don't have as many creepy crawlies scuttling around. Adult wasps catch insects like spiders and flies for their young to feast on, helping to control the numbers.

Like bees, wasps also help with pollination by transferring pollen as they visit flowers to drink nectar.

This all helps to keep our ecosystem ticking along nicely - looks like wasps aren't that bad after all!

Edible insects are on the menu in New York City.

Weird and wacky bugs: Expert tells us his favourites