Fortnite ban for FaZe Jarvis: 'Cheating, in anything, is just terrible' 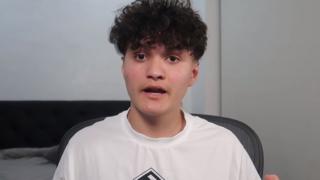 Bad news for Fortnite gamer FaZe Jarvis - he's been banned from the game!

It's after he was caught cheating during a video he was making of himself playing the game.

He was using aimbots during Solos and Playground mode but says he was only doing it to entertain his fans and never while playing competitively.

The makers of Fortnite, Epic Games, say they take cheating very seriously and those doing it could get a permanent ban across all its products.

Back to school for Wolfiez the Fortnite millionaire

Jarvis is part of gaming eSports team Faze Clan and after the ban he posted an emotional message to his fans on YouTube.

He said: "Cheating in anything is just terrible. You should never do it... it's just such a dumb thing to do."

"It didn't even cross my mind to think that I could be banned for life".

Fans have rallied behind the YouTuber, saying the punishment is too harsh.

What do you think? Should gamers who cheat be banned or should they get a second chance? Let us know by voting below.

Fortnite: Back to school for Wolfiez the millionaire gamer