Seven Worlds, One Planet: We want your questions 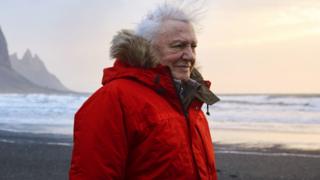 Newsround will be speaking to the team behind Sir David Attenborough's new series Seven Worlds, One Planet.

And we want to hear from you! If you've been watching it and have a burning question to ask the crew let us know.

If you're a fan of the show you'll know that it explores how climate change is affecting species around the world.

Each episode goes to a different continent, where we meet a range of animals from walruses to starfish.

It's the biggest series on biodiversity that's ever been produced.

Sir David said: "The ocean covers two-thirds of this planet of ours, the land only covers one third of the globe. There are seven great continents on which we human beings live. Each of them has its own marvellous creatures - birds and mammals, animals of all kinds."

Maybe you'd like to know how close they were able to get to the animals as they filmed? Or have you been wondering just how cold it was in the Antarctic?!

Whatever your question, let us know by commenting below. We'll try and put as many of them as we can to the team.

Seven Worlds, One Planet: Have a look at the stunning images from Sir David Attenborough's new documentary series