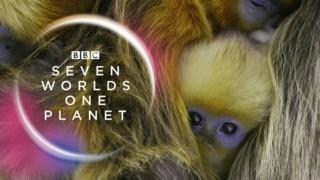 There's been a lot of talk about climate change recently.

Whether it's Greta Thunberg encouraging young people to go on school strikes, or world leaders discussing how to try and tackle it.

Each episode looks at a different part of the world, from Antarctica to Asia. It shows how animals are dealing with rising sea levels, melting ice caps and unusual weather events.

But what have we learned from the series so far? Here are five animals being affected by climate change. 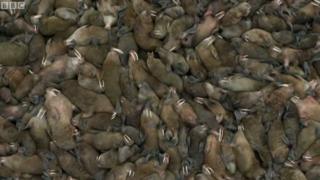 In the second episode the series looks at Asia, the world's largest continent, where we meet some walruses.

Asia makes up roughly 60 percent of the world's population, stretching from the Arctic to the equator, but ice in the continent is slowly becoming rarer in the summer, forcing animals like walruses to move to beaches over floating sea ice.

What we see in the episode is 100,000 walruses crammed on to a tiny beach, where they are regularly attacked by polar bears.

Sir David said: "It's one of the biggest gatherings of mammals to be found anywhere on Earth."

The only place they can reach a feeding ground where they can rest, are ocean beaches, such as this one.

To escape predators some walruses make it to the top of cliffs. but end up falling off as they try to get back to the sea. 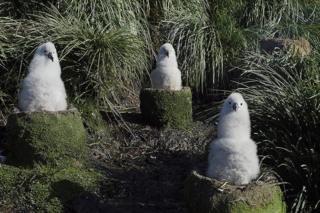 Look at these guys, they may look really cute but there's an important message about them.

In the Antarctica episode, we see how global warming is affecting the albatross - they're large seabirds that live in cold conditions.

Their population has halved in 15 years because of warming of the Southern Ocean.

This is causing more severe weather patterns than ever before and the young birds can't deal with it. 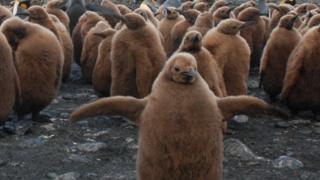 We all love penguins and these are particularly cute and fluffy!

But these penguins in Antarctica are a naughty bunch.

In spring, king penguin chicks are under strict instructions from their parents (who are no more able to tell them apart than we are, unless they can hear their voices) not to move.

These guys have other ideas though and toddle off to investigate seedheads and elephant seals!

King penguins live on islands scattered throughout the Southern Ocean, the waters surrounding Antarctica. The birds can swim as far as 310 miles, that's roughly the distance from Newcastle to London.

But climate models show that this food belt will move closer and closer to the South Pole, forcing the penguins to swim farther to catch their meals. 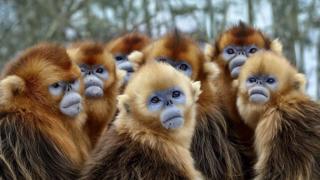 You'll find this bunch in northern China in places that are snow covered for at least five months of the year.

It's so cold there the monkeys have developed thick furry coats which you can see here.

If you look at their noses in this picture you can see they are really snubbed and barely look like noses, that's to reduce the chance of getting frostbite!

This lot are really rare because they live in restricted and little visited habitats.

It's thought climate change, along with other factors, is expected to reduce the amount of land most suitable for them to live in though.

These sociable animals are great chatterboxes too. They gossip constantly, making a variety of noises without ever seeming to move their lips. 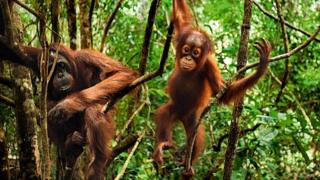 There are around 10,000 orangutans remaining in Borneo which is the third largest island in the world and the biggest in Asia.

Did you know that half of these guys have been lost in the past 16 years?

What's more females only have one infant every seven years.

They're listed as critically endangered, meaning they could become extinct.

One of the major reasons for this, is their habitats are being destroyed because of demand for palm oil.

Sir David Attenborough said: "Asia has undergone a faster change in the past 100 years than any other time in its history." He also added "its forests are being annihilated."

Have you been watching the series? Let us know what you think in the comments below.

Seven Worlds, One Planet: Have a look at the stunning images from Sir David Attenborough's new documentary series

Greta Thunberg: Teenage climate activist needs help to get to COP25 in Spain

Greta Thunberg: Why has she turned down an award?