Girls in football: The stats

Newsround has learned that there is a gap in development opportunities between boys and girls when it comes to early professional coaching.

We contacted every Premier League side to ask them when boys and girls can start in their academy set-ups.

We found that the majority of clubs have an in-house academy which includes 'pre-academy' coaching options for boys as young as five.

However, only Liverpool, Arsenal and Chelsea told us about their pre-academy options for girls between the ages of five and eight. 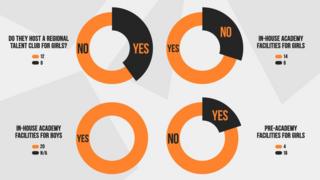 What do the statistics show?