The Football Association has promised to give every girl in England equal access to football in PE lessons by 2024.

The plan is to introduce regular football sessions for girls into 6,000 schools across England over a three-year period.

Louise Gear, head of women's participation at the FA, said: "Football has been perceived as a boys' sport and the plan is to change the perceptions and break down the barriers."

She was speaking at a showcase of the FA's new girls' football initiative, Football Schools Partnerships.

Newsround presenter Leah Boleto has been to Cambridge to see one of the partnerships in action.

Girls in football: A Newsround special

How to get the same chances as the boys

Why is there a gap in opportunities at academy level? 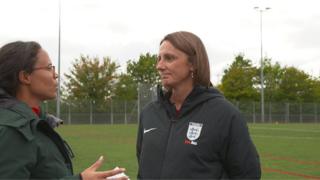 The FA has been working with the charity Youth Sport Trust to support schools across England which are committed to the growth and development of girls' football.

The Football Schools' Partnership has been funded by Barclays and will offer coaching to thousands of schools over a three-year period.

Louise Gear told Newsround: "The ambition is to give boys and girls the same experience, that's why we're embarking on this programme."

What is happening in the rest of the UK?

The Football Association of Wales has also launched a new plan to get more girls into football at a young age.

With help from positive role models - including coaching from current Wales international players - it hopes to inspire more girls to take up football on a regular basis.

The Scottish Football Association has been working with UEFA in schools to get more 12 to 16-year-old girls playing football after school as part of UEFA's 'We Play Strong' campaign.

The Irish Football Association has also announced a new five-year plan to double the number of girls playing football in Northern Ireland.

The new plan - 'Growing the Game: Maximising Impact' - is hoping to double the number of registered female players from 1600 to 3200 over the next five years.

As part of the plan, they hope to double the number of volunteers helping to coach the girls, develop an introduction to football for 4-7-year-olds players and create more media opportunities to publicise the women's game. 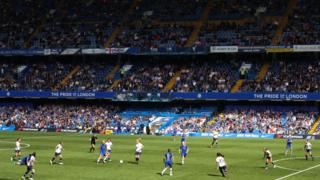 In March, Barclays was also announced as the first sponsor of the Women's Super League.

The WSL began in 2011 as an eight-team, semi-professional division. It is now Europe's only full-time strictly professional women's competition with 11 teams.

Sponsorship in sport is mainly based on its popularity to a television audience. That's why men's football has traditionally been much better funded than women's football.

However, the gap between audiences is closing when it comes to international football. A record 11.7 million people watched as England played USA in the World Cup semi-final.

People in women's football hope that as the number of fans who watch on TV or come to the stadia increase, so too will the money from brands and sponsorship. 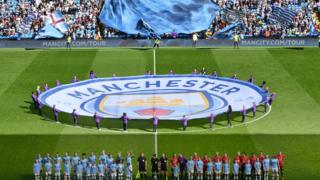 Women's Super League teams will hold matches in their club's main stadiums for the first time this season after seeing the success of Italian and Spanish football teams who have been breaking attendance records.

On 7 September, Manchester City's derby against Manchester United was played at the 55,000-capacity Etihad Stadium for the first time.

Before that, average attendance at WSL matches was 937.

The FA are also experimenting by making some WSL matches "double-headers" with the women's game happening just before, or after, the men's games.

They hope it will encourage fans to stay on once a Premier League game has finished to support the women's team.