A record 11.7 million people watched as Millie Bright and the rest of the Lionesses battled it out in the semi-final of the 2019 Women's World Cup.

The match marked a huge moment in women's football.

Not only was it the most watched British TV event of 2019, but it came in a year where more women and girls were playing football than ever before.

Thirteen-year-old Olivia Hancock is one of those girls.

Olivia has been campaigning for gender equality in football since she was seven.

In May 2019, she was a guest speaker for Uefa before the Women's Champions League final, and spoke about her goal to make sure girls are treated the same as boys when they're playing football.

Her story caught the eye of Millie Bright and the two decided to meet to discuss the future of women's football.

Girls in football: A Newsround special

Girls in football: The Academies

Girls in football: The future

Olivia spoke to Millie about her difficult experiences in football. Specifically, she spoke about a time where she was punched by a boy when playing in a mixed football match.

Millie told Olivia that she thinks young boys need to be given more of an education about the importance of women's football.

"That's someone's career, someone's dream and it could be their job for a very long time," Millie said.

Millie also spoke about the importance of women's teams playing at men's football stadiums in order to attract more fans to the games.

"We talk about change and being equal in the game," she said.

"For me to say that I wouldn't want to play at Stamford Bridge every week would be a lie. That's something all clubs should be trying to do, playing at the big stadiums."

When Millie asked Olivia what she'd like to see happen to encourage growth in the women's game, Olivia said: "I think it has to start at primary schools, set teams up there so they can start at an early age and work their way up in the game." 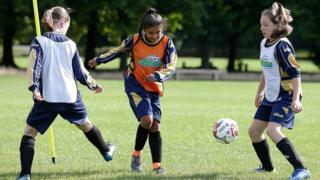 Matt Bunn for The FA
Over 2.7 million women and girls have regularly played football in the last year

The Football Association is halfway through a four-year plan to make football the number one sport for girls in England.

More than 12 million people played football in England last year. A quarter of those were girls and women.

That's almost 10% more than the year before.

In Scotland, the number of women and girls playing football has doubled in the past five years.

The Irish Football Association has also announced a new five-year plan to double the number of girls playing football in Northern Ireland.

The new plan - 'Growing the Game: Maximising Impact' - is hoping to double the number of registered female players from 1,600 to 3,200 over the next five years. 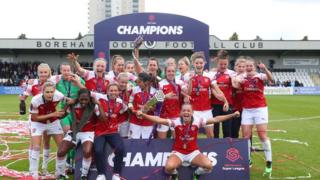 England's women team are set to welcome a record 75,000 crowd for a friendly match against Germany on 9 November at Wembley Stadium.

However, at club level, the crowd numbers haven't matched that success.

The average attendances for England's top flight women's division - The Women's Super League (WSL) - have hovered around the 1,000 mark for the past couple of years.

To put that in context, the average attendance for a Premier League match is close to 38,000 fans.

The FA has started to experiment this season by holding WSL matches in bigger stadiums and lowering ticket prices. 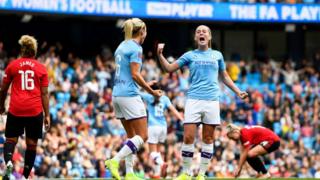 Experts think this record attendance was helped by the fact that there were no Premier League matches on that weekend. Plus, kids were allowed free entry and tickets were only £7.

Added to this is the vast difference in funding - that's the amount of money that clubs and leagues receive from sources such as sponsors and deals to show matches on TV.

Find out why women's football was banned!

In March 2019, Barclays was announced as the first sponsor of the WSL.

The WSL began in 2011 as an eight-team, semi-professional division. It is now Europe's only full-time strictly professional women's competition - it has 11 teams.

Sponsorship means the league winners will earn prize money for the first time - £500,000.

The winner of last season's Premier League, Manchester City, were given £147m.