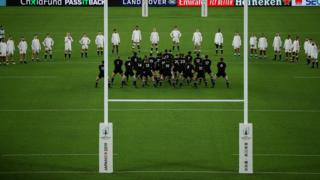 The England rugby team have been fined £2,000 for crossing the halfway line on the pitch as they lined up to face the New Zealand team before the World Cup semi-final.

The New Zealand team were performing the haka.

World Rugby rules state that teams must remain within their own half of the pitch to receive the haka.

Referee Nigel Owens and his team had to ask several England players to move back as they strayed over halfway.

What is the haka? 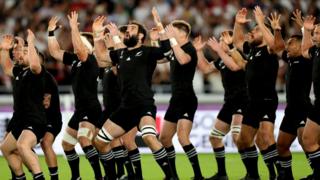 The haka is a type of ancient Māori war dance traditionally used on the battlefield, as well as when groups came together in peace.

The haka involves heavy foot-stamping, rhythmic body slapping and loud chanting. It is important because it represents a display of a tribe's pride, strength and unity.

The haka means "fierce dance". Nowadays the haka is performed during special ceremonies and is one of the highlights of any match involving New Zealand.

More about the haka

Prince Harry does the Haka

Pictures: How do you do the All Black Haka?

How to do the perfect Haka 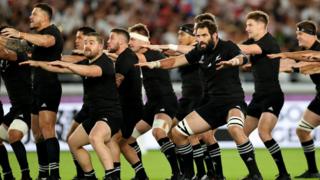 Many Kiwi sports teams perform the haka before their international matches, which has made the tradition widely known around the world.

This began with the 1888-89 New Zealand Native football team and has been carried on by the New Zealand rugby union team since 1905.

There are also some sensitivities around how opposition teams respond to the haka as not treating it with respect can be considered to be an insult to Māori culture.

What happened in this case? 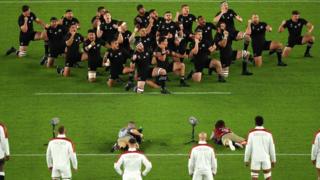 When the New Zealand team were performing the haka, England decided against the usual shoulder-to-shoulder line and instead lined up in a V shape and stepped over the halfway line. But England were fined because they crossed the line, not because of their response to the haka.

Reacting to news of the fine, New Zealand head coach Steve Hansen said he thought England's response to the haka was "fantastic", adding: "They didn't get fined for responding, they got fined because they went over halfway."

Captain Owen Farrell said England planned their response to show New Zealand they would not have things all their own way in their match.

What has happened in the past? 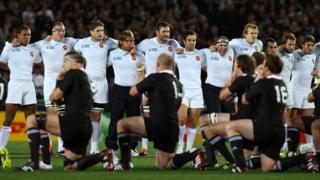 Part of the reason that the haka is so often talked about is because of the way other teams respond to it.

It is a traditional war dance meant to show off Māori culture but also to intimidate the opposition - and some teams feel they shouldn't simply have to watch, but should be allowed to respond.

World Rugby, who organise the Rugby World Cup and govern the global game, has set rules about how teams face the haka, which include keeping the two sets of players at least 10 metres apart and for the teams to stay in their own half.

Getty Images
The France squad were clad in red, white and blue t-shirts, representing their Tricolore flag, before their 2007 World Cup meeting with the All Blacks

Before that safe space was introduced, several teams decided to accept the All Blacks challenge in person.

In 2007 France, advanced on the haka and in 1997, England player Richard Cockerill went nose to nose with opposite number in a match at Old Trafford.

In 2011, France formed an arrowhead shape and advanced on New Zealand while they performed the haka before the World Cup final in Auckland.

They were fined £2,500 for breaking a "cultural ritual protocol", which meant that it was culturally insensitive.