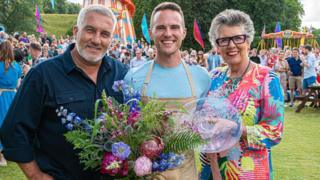 After thirty tough challenges over ten weeks, thirteen bakers were whittled down to just one winner... and this year David Atherton has been crowned the Great British Bake Off king!

In this series the contestants have baked everything from Angel Cakes to Scored Bread; Indian Milk Desserts to Custard Pies; and then Sarawak Layer Cakes to Vertical Pies.

In the final episode, the three remaining bakers Steph, Alice and David battled it out in the iconic white tent for their last ever challenges of 2019.

Famous faces to look out for on Children in Need

Junior Bake Off: What do we know about the next series? 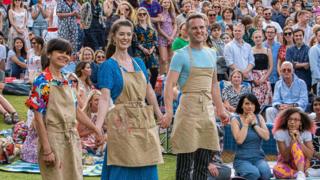 Mark Bourdillon / Love Productions
Steph, Alice and David battled it out in the intense finale!

In a classic signature they had to show if their chocolate cake was tasty enough and full of flavour.

Then their skills were tested with twice baked stilton soufflés in a tense technical.

I saved the best till last, and it's the best feeling in the world. Week on week other people were stronger, I was always the underdog and yet I just managed to get through.

Finally, in the showstopper they had to create a stunning visual illusion picnic basket using only cake, sweet bread and biscuits!

And it was David who impressed the judges the most. 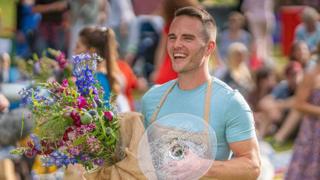 Mark Bourdillon / Love Productions
Talking about taking part in the show, David said, "Bake Off has given me a whole new set of friends"

Speaking about his win, David said; "It feels so good! It's been weeks and weeks of intensity and fatigue and then to finish it with this!

"I am still trying to process it. Thousands of bakers apply every year, and every one who gets into the tent is an exceptional baker. I think I just didn't get stressed at the pressure of the tent."

"Honestly it was never in my mind that I thought I could win this, I have had daydreams of winning Bake Off for about 10 years. The judges always loved my presentation but not my flavours so to get a first in the Technical of the Final was amazing. I didn't imagine for one micro second that I would get to the Final let alone win it. It's just unreal."

He added, "Bake Off really has definitely broadened my baking knowledge and has helped me try new things. The challenges force you to take on new and different types of icing and meringue that you wouldn't normally bake with."

"And don't think you have to be a totally perfect baker to apply for Bake Off, if you think like that you won't ever be ready. You get a lot of help and you learn so much along the way. It's a great experience and I would encourage any amateur bakers out there to apply." 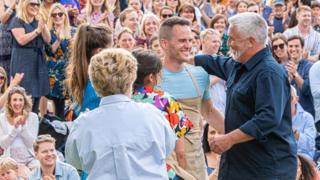 At the end of the episode Paul said, "David came in as probably the underdog into the final knowing that twice Alice has won and Steph won four times. He has gone from nothing to win the whole thing; it's priceless, absolutely priceless, he should be really proud of himself. I think he has done an amazing job."

And Prue added: "David is an extraordinary baker and I am so full of admiration for him. Right from the beginning he has never lost his temper he has always been very neat and organised. It was really a question of the tortoise catching the hare, he just steadily went on and won!"

Fellow baker Alice said: "David just blew us out of the water - the best baker won. I am so happy and really proud of myself and I can really leave with my head held high. It's just the best feeling."

And fellow runner up Steph said: "I have made some amazing life long friends. It's just really been the most incredible experience ever".

Did you watch the final? Do you think the right person won? Let us know in the comments below.

Junior Bake Off: Who are the presenters and judges for the new series?