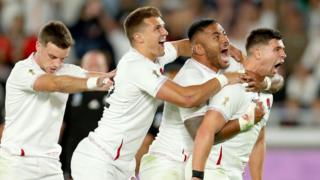 If you're an England rugby fan you're probably still celebrating the fact the team is through to the Rugby World Cup final!

Eddie Jones' side will face South Africa on Saturday 2 November, in Japan, after beating New Zealand 19-7 in an epic semi-final.

Unsurprisingly a lot of England fans want to be at the game in Yokohama to watch the match but ticket prices have sky rocketed.

Some ticket resale sites have reported some seats are going for more than £11,000!! Crazy right?

Quiz: How much do you really know about the Rugby World Cup?

If you want to fly there then you might also find it tricky as demand for flights has also increased.

British Airways says there's been a spike in interest for flights to Tokyo, Japan's capital city, which is around 20 miles away from the venue.

Rugby World Cup organisers have warned that fans with tickets purchased on unofficial sites would be turned away at the stadium in Yokohama but that doesn't appear to have had much of an impact on demand.

It'll be England's first Rugby World Cup final in 12 years. In 2007 they lost to, you guessed it, South Africa!

Are you one of the lucky ones that has managed to get hold of a ticket? Are you off to Japan at the last minute? What are your plans for watching the game at home with your mates on Saturday? Let us know in the comments below.