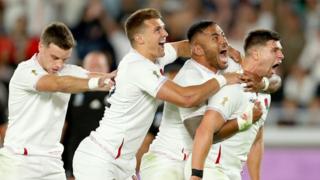 ALLSPORT/Getty Images
Can England win the Rugby World Cup final? Send us your messages for the team!

England are about to play in their first World Cup final in 12 years!

Captain Owen Farrell and his team will face South Africa on Saturday.

England's coach Eddie Jones described the game as "the biggest sporting event in the world" and challenged his team to play with no fear.

England beat New Zealand to get to the final, they kept up a solid performance and finished the match with a 19-7 victory.

Find out more about what happened during the game.

If you could give the England team a good luck message ahead of the game, what would you say? Send in your videos and pictures below, or add a comment!

(Click here if you can't see where to send in your messages.)

England and Wales are in the semi-finals