Remembrance Day: What's it like growing up in a military family? 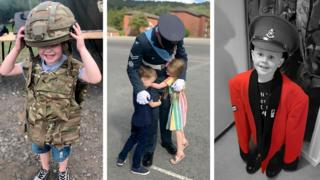 Little Troopers 2020 Calendar
Warren, Mia and Max, and Joe are also in the charity calendar

A group of children have been sharing their experiences of what it is like growing up in a military family.

This means they have a parent or relative who is serving in the armed forces.

It often means they might not see them for months at a time if they have to work in war zones around the world.

Now the children have been included in a special calendar to raise money for the charity, Little Troopers, which helps keep young people like them connected with their parents even if they're thousands of miles away. 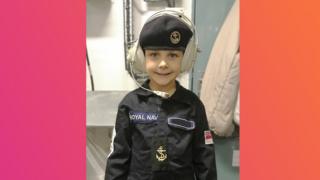 She told Newsround: "It's hard as we miss mummy but I find it exciting when she gets back as she brings me snow globes from all over the world for my collection.

"I love to go on mummy's ship and help her with her work. I find it really hard saying goodbye all the time." 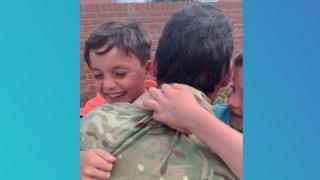 People in the military often have to move around for their job, which six-year-old Brayden thinks is "cool because we get to live in different places like Canada".

His brother Owen, who's nine, finds it tough though: "It's hard because you have to leave friends."

They both said that the best thing about being in a military family is when their father comes back and "seeing the tanks at daddy's work"!

Owen added that he likes the picture of him in the calendar because it "reminds me of how happy I was when dad came home after a long time away". 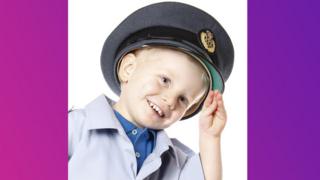 Hayden said: "It's difficult sometimes because my dad has to go away. It is also hard because my friends keep moving away."

Although Hayden's nine now his picture in the calendar is from when he was just three years old.

"I am really proud to be on the front cover, I didn't think I was that cute!" he said.

How technology helps three girls stay in touch with Dad

What is happening in Jersey?