School libraries: One in eight schools 'doesn't have one' 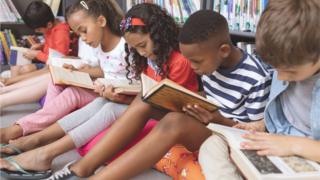 Do you have a library in your school or a special room where you can go to read books?

A new report suggests that one in every eight schools doesn't have anything like this.

In many cases, there might have been a library previously, but it is now being used for something else - for example, a space for teachers to meet or even as a classroom.

So we want to know what you think - is it important that every school has a library?

Have your say in the vote below (if you can't see where to do this, then click here) and then head to the comments at the bottom to let us know why you feel that way.

The research was commissioned by the Great School Libraries campaign which aims to make sure all children have access to a good school library.

According to the research, primary schools are less likely to have a special reading room than secondary schools.

Having access to books like this, has been shown to have lots of benefits for school pupils - for example, improved reading and writing skills, and students getting greater enjoyment out of reading as a hobby.

Schools in England were more likely to have a library (nine in ten schools surveyed here had one), but this figure dropped dramatically for schools in Wales (fewer than seven in ten) and Northern Ireland (fewer than six in ten).

The library book that was returned - 120 years late!

11 books that have changed the world 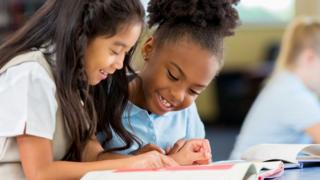 In September 2018, it was announced that more than 450 children would be helping to shape a plan in Scotland to make sure that all school pupils there have access to a "dynamic" school library.

The Scottish government said the plan was the first of its kind in the UK.

It said the strategy was designed to improve reading levels, put libraries at the very centre of school life and - according to deputy first minister and education secretary John Swinney - make school libraries "a place of contact, friendship, dialogue and reassurance".

Nick Poole, boss of the UK's library and information association CILIP, commented on the new report: "The findings highlight the urgency of securing national school library strategies and investment in England, Wales and Northern Ireland, drawing on the example of Scotland."

The research was carried out across 1,750 schools in England, Wales and Northern Ireland.

Who is the new UK Children's Laureate?

What is World Book Day all about?