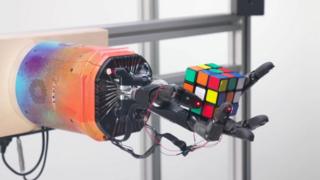 Solving a rubik's cube is pretty tough. If you've ever had a go you'll know it can take a long time.

But a robot has managed to do it in around FOUR minutes.

What's more, it did it using just one hand!

OpenAI, which is an artificial intelligence company, used a computer simulation system to teach the robot hand to solve the cube, running through routines that would take one person around 10,000 years to complete.

More on the Rubik's cube

What's unique here is that this robot was designed to be multi-purpose, in other words it wasn't created to just solve a rubik's cube. That's why people are so fascinated.

Staff at OpenAI were trying to build a general purpose robot which is similar to how humans and their hands work.

The team would gradually inject complications into the process that would force the robot to adapt in order to complete the cube.

This technique - called automatic domain randomisation gave the robot consistent, intricate skills so it can handle changes in the environment that go beyond what a computer could predict.

Mind blowing isn't it? Let us know what you think in the comments below.