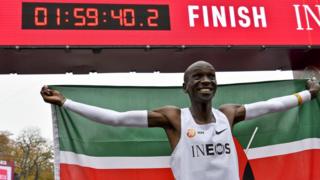 Long distance runner Eliud Kipchoge has just become the first person ever to run a marathon in under two hours!

The Kenyan athlete completed the 26.2 mile course in Vienna, Austria in a time of 1 hour, 59 minutes and 40.2 seconds.

Kipchoge's incredible accomplishment is a reflection of all the hard work and vigorous training he's undertaken to prepare for the marathon and the athlete has also had the support of a dedicated team.

It's not an official world record because of the way it was organised and run, but Eliud won't be too sad - he's the official marathon world record holder anyway!

Kipchoge hopes his most recent success will inspire others to believe that nothing is impossible. "This shows no-one is limited," said the marathon runner. "Now I've done it, I am expecting more people to do it after me."

So let's find out about some other trailblazers.

Which world record impresses you the most? 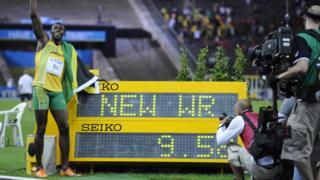 In 2009, former Jamaican sprinter Usain Bolt became the fastest man on the planet after breaking the world record for the 100-metre sprint.

The runner completed the race in an epic time of 9.58 seconds at the IAAF World Championships in Berlin, Germany and the record still stands today.

Not only is Bolt the current record holder for the 100 metres, but he also holds the world record for the 200 metres which he ran in just 19.19 seconds! 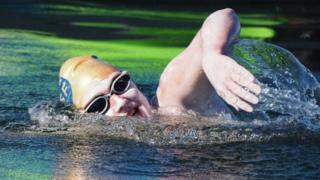 Four other swimmers have swam across the English Channel three times without stopping, but this was the first time anyone had completed a fourth leg - that's impressive stuff! 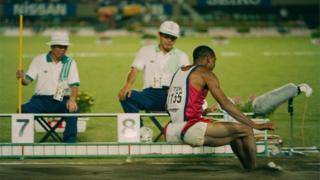 US athlete Mike Powell of the United States made his world record leap during the long jump event at the IAAF World Athletic Championships on 30th August 1991 at the Olympic Stadium in Tokyo, Japan.

Beamon's record was set in and 1968 and Powell's still stands nearly 30 years later - it's a tough one to break!

Powell is a two-time world champion in this event but never won an Olympic gold medal! 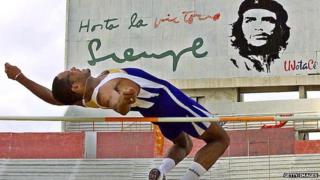 No one has jumped higher than Cuban high jumper, Javier Sotomayor.

He took Olympic gold in Barcelona 1992 and silver in Sydney 2000 and were it not for Cuba's decision to skip the games in Los Angeles in 1984 and Seoul in 1988 for political reasons, he surely would have won more.

If you want an idea of how high it is, imagine running up to and jumping over the crossbar of set of football goal posts! 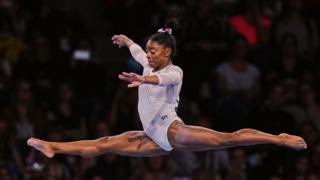 American gymnast Simone Biles recently made history after setting a new record for the highest number of World Championship medals won by a female gymnast .

The pint-sized sensation, who stands at just 4 foot 8 inches, now has a whopping 21 medals!

She also became the first woman to win her 5th women's all around title in Stuttgart in Germany and her 2019 World Championships aren't over just yet!

She needs just two more medals to beat the current record for the most number of world medals held by a male or female gymnast. 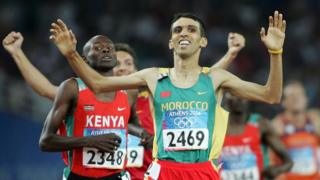 The former middle-distance runner, who comes from Morocco, ran the distance in just 3 minutes and 43 seconds, breaking the previous record by more than one second.

He achieved the record at Rome's Olympic Stadium in 1999.