Hong Kong protests: What is the 'Umbrella Movement'? 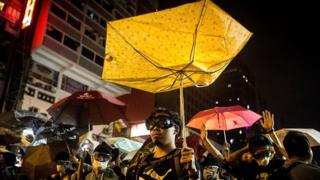 Thousands of protesters are gathering in central Hong Kong to mark the fifth anniversary of the Umbrella Movement that bought parts of the city to a standstill for over two months at the end of 2014.

There are also bigger protests expected on 1 October when China celebrates its 70th anniversary.

What is the umbrella movement? 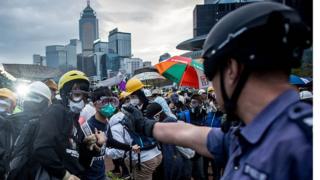 Demonstrators brought Hong Kong to a virtual standstill in 2014 when they demanded the right for the territory to pick its own leaders.

For many years, Hong Kong was run by the UK as a part of the former British Empire. That was until 1997, when control of the city was handed over to China.

But a special agreement with China - called "one country, two systems" - was created to make sure that Hong Kong had some independence from China.

Why did the law that caused the protests get scrapped?

How do reporters are stay safe in the Hong Kong protests?

Meet the students in Hong Kong on strike from school

The protests started in reaction to a decision made by China that it would allow elections in Hong Kong in 2017, but only from a list of candidates pre-approved by the Chinese government.

Tens of thousands of people, of whom many were students, camped in the streets and demanded the right to fully free leadership elections.

It was called "the Umbrella Movement" because protesters used umbrellas to protect themselves from the tear gas used by police.

What are the current protests about?

In June 2019 new protests were sparked in Hong Kong against a law that could have seen its citizens tried, or taken to court, for political crimes in China.

Although the law was scrapped the protests continued over issues like democracy and human rights in Hong Kong.

Benny Tai, a leading activist who was put in prison for his role in the Umbrella movement, says the campaign switched young people on to protest.

Though the original Umbrella protests died down the action inspired many people in Hong Kong to take to the streets to protest in ways we have seen once again in recent months.

Hong Kong: Children and parents protest with balloons and banners